It's as varied a bunch of apps as ever hitting Apple's store this week. From the Times Concise Crossword to the iStudiez Pro revision planner, the App Store is both all work AND all play this week. Keep an eye…

Likwid is the latest music based app game from FunMobility. However, whereas most music games stick almost religiously to the tap-a-long format laid down by the likes of Guitar Hero, Likwid prefers brain-bending puzzles. The objective is to fill targets,…

Depending on your viewpoint and cynicism levels today, the Rubik’s TouchCube is either an extremely cool update of the 1970s puzzle world-beater, or a cynical attempt to cash-in on today’s touch screen madness.

Frankly, we’re prepared to confound your expectations by going for option #1 – it’s a very cool little toy. The Rubik’s TouchCube not only LIGHTS UP for your amusement, it also MAKES SOUNDS – sampled clunks and clicks, similar to those made by furious boffins racing each other to complete the thing the quickest…

I'm all for technology being used to help kids to learn, but sometimes, a basic device should just do one thing. Take an MP3 player. All it has to do is to play the music uploaded to it, in… 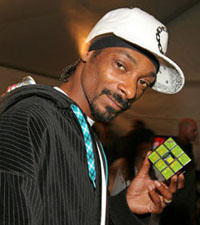 The Revolution is more of a gimmicky remix of the old Cube than a new lifelong challenge, with loads of flashing lights and pre-programmed sounds giving the goldfish-brained youths of today something to stare gormlessly at…

A computer has calculated that any configuration of the classic 3×3 Rubik’s Cube can be solved in a maximum of 26 moves.

This astounding news comes just weeks after scientists programmed a computer played the perfect game of draughts. Haven’t these computers got anything better to be doing with their CPUs?