Skyrim gets a major update across all platforms today, one that should make PC and PS3 gamers in particular very happy. While Xbox 360 and PS3 gamers still have to wait for the patches to be greenlit by Microsoft…

The Elder Scrolls V: Skyrim may have won game of the year awards left, right and centre, but that didn't bring much joy to PS3 owners of the massive RPG. A game-breaking bug on the version for Sony's console…

If you're one of the many millions still playing BioWare's superb new MMORPG Star Wars: The Old Republic, you may or may not be (depending on your stance when it comes to cheats and exploiting game bugs) pleased to hear…

It may only be enjoying its first fledgling days as the world's premier space-faring MMORPG, but BioWare and EA already have massive updates planned for Star War: The Old Republic. Just like every other MMO, designed to consume hundreds of…

In something close to a u-turn, Apple have decided that they will now release a Mac OSX update to slow the spread of the Mac Defender scareware program. Affecting a growing number of Mac users, Apple intially turned its…

Call it a victory for pester power if you like, but EA has just released a deauthorisation tool for their DRM system in Spore. As previously reported, Spore would only let players install the game five times before forcing you to buy a new copy. This patch allows you to ‘de-authorize’ a computer, meaning that you get one of your credits back.

Interestingly, the de-authorization process doesn’t involve uninstallation, so you can leave it sat on your hard drive, and just de- and re-authorize as necessary. Of course, if your hard drive corrupts, then you’re not going to be able to get that installation back, but do you know anyone who’s lost five hard drives that way, ever? 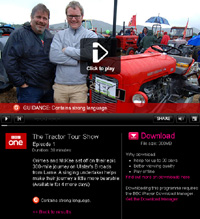 Great news. The only time I’ve had to use Internet Explorer so far this year was when loading up the Beeb’s iPlayer to see if the new series of Torchwood was as bad and as homo-erotically-charged as everyone said it was. It was.

Fortunately, iPlayer now works on Firefox. Without any extra fiddling around. Look at that image there – I just took that in Firefox. It worked. There was no fiddling around or installing of stuff. Internet Explorer is now dead to me…