Here's a story to tickle the interest of video editors across the globe. Ever spent all night searching for license-free music and samples to accompany your YouTube vids? It's not that easy if you haven't, especially to find something that…

Tomorrow is Free Music Friday, well, if you’re a Vodafone customer it is.

Awesome yes? What a reward for Vodafone’s loyal customers. Finally, you’ll be able to listen to song’s you’ve, you know – bought, on whatever you like, not just your phone. And to celebrate that momentous victory of consumer over company, you can listen to Dappy and his buddies making raps and what have you.

That is what you do isn’t it – make a rap? I mean rap isn’t a verb, unless you’re rapping someone across the knuckles – surely…surely!

Vodafone: What. A. Joke.

As a mark of protest can everyone on Vodafone please download all eight songs and then delete them.

An interesting rumour has appeared on the “that’s a pretty logical move now you think about it” pile – apparently Nokia and Microsoft are looking for a tie up between Microsoft’s Zune Marketplace and Nokia’s mobile phones.

This makes a lot of sense for two ugly kids for whom prettyboy Apple is the bane of their lives – Microsoft doesn’t make phones, having repeatedly denied that they’re planning a “Zune phone”, and Nokia doesn’t make dedicated music players…

Great news for those who were specifically waiting for Amazon’s music download service to cross the Atlantic, or who just want to see more competition in the UK online music scene, as Amazon is likely to launch its Amazon MP3 service in Britain later this year.

Though the company has not officially confirmed the service, nor a launch date, it is believed that executives from Amazon have visited London to strike deals with record companies…

Microsoft is clearly a bit jealous of how well the iPhone/iTunes/iPod trinity is raking in cash for the Apple machine, so is keen to try and boost the amount of music services available “on the go” to users of Windows Mobile phones.

“One thing that Apple has leveraged on is the music scenario, and I think that that is something the operators and ourselves are partnering on, just to make sure that consumers can use live music in the best way,” Andy Lees, senior vice president…

A new TV show called “The Nokia Green Room” will appear on Channel 4 later this year, with the mobile company sponsoring the 30-minute live music show.

The unique selling point that convinced executives on both sides of the table that this was a great idea? Putting cameras and microphones “backstage” so viewers… 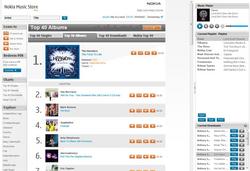 Well, to clarify: it’s broken for me. I reviewed the Nokia Music Store last week, based on a morning using the web-based store on my Windows Vista PC. The review was broadly positive, highlighting some of the niggles, but generally concluding that it was a decent start. I’m not quite so impressed now. 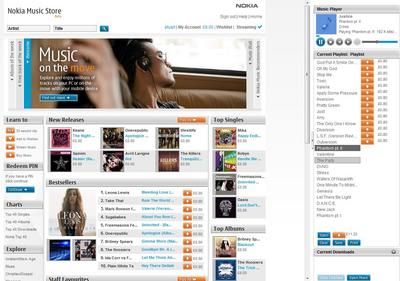 Nokia cut the virtual ribbon on its Nokia Music Store this morning in the UK, so I’ve spent the last few hours playing with it. You can read the blow-by-blow account of my first hour or so here, and check out a few screenshots here, but this post is an attempt to set down the strengths and weaknesses of the service in a more organised fashion, and come to a verdict about how it compares to iTunes. 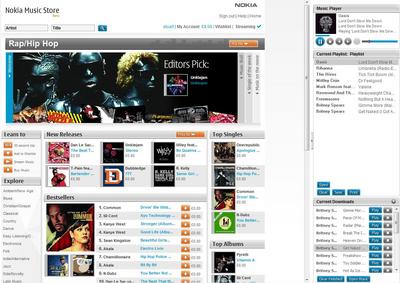 This is just a companion post to my earlier blow-by-blow review of the Nokia Music Store, which went live in the UK today. Feast your eyes on the shot above, and the others after the jump, to see how it all works. The one above is the genre category page (click on them to get bigger versions) 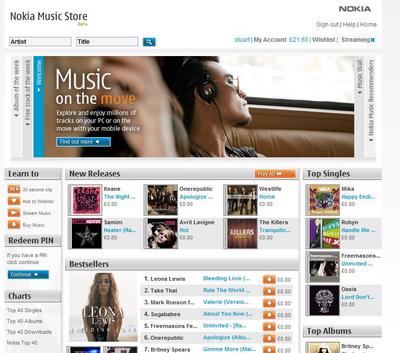 So, Nokia’s Music Store has finally gone live in the UK this morning, albeit just slightly later than the promised 7am opening time. I got straight on there to roadtest the service and see how it compares to iTunes. My collected thoughts are below, but the topline is this: good design and usability, a nice selection of music, some niggles around payment and compatability, and the unlimited streaming feature experienced some early teething problems. But read on for the blow-by-blow account.