It's the week following the US iPhone launch, so there's plenty of opinion and review. First post-launch iPhone reviews in: not perfect but still looking great Ripping it apart: Who supplied what on the iPhone? There's a lot of speculation…

The latest rumour surrounding the iPhone's European launch is that it's coming on November 1st, and will be sold exclusively by Germany's Deutsche Telekom, known better in the UK as T-Mobile. Unnamed sources in the German newspaper Rheinische Post claim…

– iPhone mania has almost broken AT&T’s network, so JAJAH’s attempt to bring VOIP rates to the handset may be well-timed [iPhonic]

– Recognizing that over half of YouTube users are outside the U.S, country-specific sites have launched today. And yes, the UK is one of them [Techscape]

Just a week after we discovered the iPhone’s US launch date, Steve Jobs delivered his keynote address at Apple’s World Wide Developers’ Conference.

Developers who had been eagerly waiting to see what kind of opportunities they’d get to put their applications on the iPhone found out: there’s no Software Development Kit – just use Safari and Web 2.0 technologies.

Unsurprisingly, that annoyed some people, but not everyone. It certainly hasn’t stopped some iPhone applications appearing two weeks before the iPhone does. Whether they’re useful though…

It must be a trick or a scam, surely? Pure Mobile (who also have a presence in the UK) has been offering an unlocked iPhone – though there’s precious little other detail. Quite how they’re going to get hold of one, unlock it, and offer it to punters is rather bemusing. Maybe they need a call from the Better Business Bureau?

– The controversy over Resistance: Fall of Man continues. The Church is now appealing directly to the people of Japan [PSPSPS]

– It looks like a review of the iPhone may be just a couple of weeks away. A Wall Street Journal columnist is putting one through its paces as we speak [iPhonic] 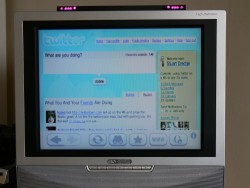 – If your experience of surfing the web on your Wii has proven frustrating, you’ll be pleased to know that web designers are starting to think of you [Wii Wii]

Your dream of an outdoor home cinema could soon become a reality. SunBrite’s new HDTV is “all weather resistant” [HDTV]