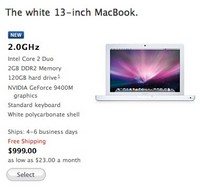 Bought a Macbook recently? Start kicking yourself, because Apple has just announced a sneaky upgrade to the 13″ white MacBook which pumps up the capabilities of the diminutive, but popular, machine to the standards of its unibody compatriots.

The machine pumps the processor up to a Core 2 Duo with faster 1,066MHz FSB, a doubling of RAM (2GB, rather than one) and a considerably nicer integrated graphics unit. Bluetooth’s upgraded from 2.0 to 2.1, too.

It hasn’t hit the UK store yet, only the US one, but I suspect us Brits will get the same upgrade within a matter of days. In the meantime, if you were planning a purchase, it might be worth waiting a day or two until the UK store updates too. Price is still the same. 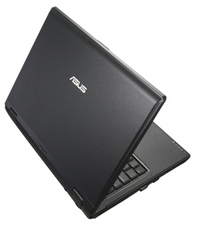 Asus isn’t just there for the small and cheap things in life. It also creates monster power-laptops that you might think twice about carrying about with you for fear of dislocating a shoulder.

Like this thing here, the B80A, a new prestige, top-of-the-line model for the power business user who is buying things on expenses so doesn’t mind how much it costs.

Packing a Core 2 Duo of your choice up to the T9400, a 14.1″ screen, Windows Vista and hard drive support for SATA models running at a battery-eating 7200rpm, it is every bit the laptop for the image-conscious man in a suit about Euston train station. Here is how Asus describes the needs of the business user…

PC World has announced the launch of its new Advent Eco PC, a desktop computer which uses just 25 watts of power, yet hasn’t skimped on specs.

It has a T5250 Intel Core 2 Duo processor, 2GB of RAM, 160GB hard drive, DVD writer, four USBs and a DVI output, wireless keyboard, and built-in Wi-Fi (hence the big antenna sticking out of the back)… 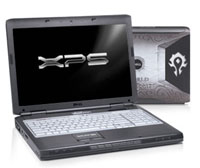 It’s the PC game that saved PC gaming, now World of Warcraft is adding quite a significant money to Dell’s ‘bottom line’.

Two new ludicrously expensive WoW-badged XPS laptops have been announced by the PC flogger, coming in either Horde or Alliance designs… 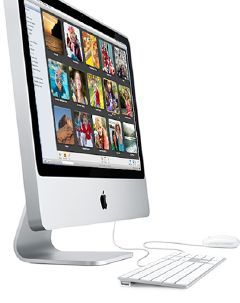 Apple has launched its new range of iMacs, dropping the 17 inch model and focusing on the 20 and 24 inch screen sizes. 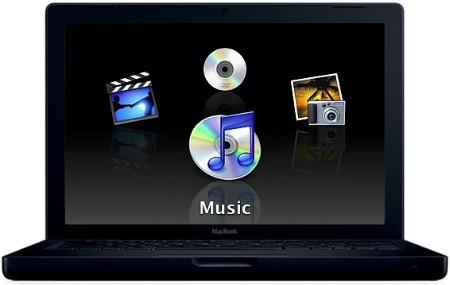 Apple today have released their latest line of computers to sport Core 2 Duo chips. Hot on the heels of the MacBook Pro and latest iMacs, it now boasts 25% better performance than the previous MacBooks….

Apple have released an updated line of MacBook Pro notebook computers, now sporting the Intel Core 2 Duo processors found in the latest iMacs. There are two sizes to choose from, one with a 15.4-inch screen and the other…