If there is one thing other than "Bigotgate" that this General Election will be remembered for, it'll be the growing use of social media to share party policies and give voice to the nation's voters. From the #nickcleggsfault hashtag to…

The 2010 General Election is almost upon us, and after months of long, hard campaigning up and down the streets of Britain, it's turned out to be pretty riveting, nail-biting stuff. A real three-horse race for the first time…

The controversial £6 per year super-fast broadband tax has been dropped as the government races to push through key legislation before Parliament is dissolved next week. The tax on all households with a land-line was to raise £170 million a…

Of these two issues the BBC is obviously the one that is concentrating the minds of media barons the most. How can they possibly charge readers for online stories when a first rate news organisations is offering their content for free? 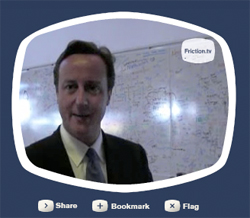 The Conservative Party has launched a branded channel on video debating site Friction.tv, in what it says is an attempt to engage with the public about key issues.

Now that you’ve had your say about which political party has made the least amount of effort to target us web-savvy citizens, cast your vote in the final poll regarding which party has impressed you the most.

Who is the most web 2.0 savvy out of David Cameron, Gordon Brown and Ming Campbell?…

Once you’ve read the previous feature about which of the three main political parties in the UK are the most web 2.0 savvy, cast the only vote that matters this year, in our web 2.0 Houses of Parliament Hall of Shame election.

If we’re not being called to vote in a snap Autumn general election, this is the next best thing. Give your two pence worth and tell us, who has made the least amount of effort online, and who should be given a place in our web 2.0 Houses of Parliament Hall of Shame. 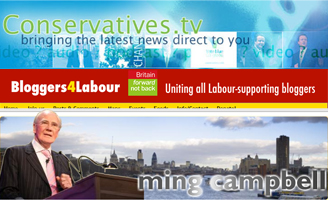 Sadly Gordon Brown has done the sensible thing/bottled out at the last minute (delete as appropriate) and put the general election on hold. Which personally I find a little disinegenious given that the Tech Digest team spent most of last week checking out the political parties’ online offerings so we could announce who we thought would win the web 2.0 election.

Well we can’t be bothered to hang on to this piece until May 2009 or whenever he pulls his finger out, so here is Tech Digest’s guide to how the UK polical hacks are using the web to combat the widespead political apathy which seems to have taken root in the UK.

None of the sites are anything near as whizzy or imaginative as Barack Obama’s online calling card, but there is some decent stuff out there including evidence that – get this – the Tories may have a sense of humour.

So do all these sites mean anything to anyone who is not a resident of Hackville? We got Tech Digest’s politically agnostic Deputy Editor Katherine Hannaford to find out.

So the UK’s Prime Minister, Gordon Brown, announced on the weekend he wouldn’t be calling a general election this week. But it wasn’t because of David Cameron’s unscripted speech at the Tory party conference or the fact that he wants us to properly digest yesterday’s public spending review. It was because his minions couldn’t unearth a sex-tape showing an opposing MP in a compromising position in time. Ok, that was wishful thinking, admittedly.

Nope, the reason why ol’ Gord bottled it was because he hasn’t got his Facebook profile in order, he is still agonising about the poor viewing figures on his YouTube account and he hasn’t yet worked out what Digg is. Last I heard, he thought it was a gardening forum.

If only eh? Anyhow, instead of having a real general election in the UK, we here at Tech Digest are going to have a web 2.0 election – deciding which of the three main political parties have made the best web 2.0 efforts thus far. Read on below for the initiatives made by the Conservatives, Liberal Democrats and the Labour Party, and we’ll give you a chance afterwards to elect a party to the Political web 2.0 Houses of Parliament….