If you have recently started competing in the UK job market, you can't have failed to notice how various cities around the country have flourished - largely on the back of tech revolutions left, right and centre. These developments are boding well for local communities, too. As the World Economic Forum has pointed out, technology…
25th June 201915th July 2019 Tech Digest Correspondent News, Smart Cities

Motorola has just kicked in with a new marketing campaign for its Motozine ZN5 mobile. The phone features a five megapixel camera, developed in conjunction with Kodak, and so Motorola’s recruited eight photographers around the world to capture the essence of the city they live in, using the ZN5.

The photographers had to stay awake for 24 hours taking photos, but the results are surprisingly awesome. There’s a lovely picture of a taxi and a white van at 17:00 in London, and a beautifully muted shot of a railway station in Mumbai at 13:00. The Moscow subway at 01:00 is incredible, too. 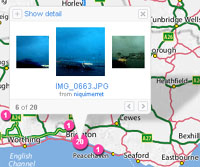 Flickr Places is like one of those Google Maps “mash ups” that let you see all the back alleyways of Bratislava that Dave puked up in on his stag do last year.

The forthcoming application lets users see where the latest global hotspots are for picture uploads, with users..