Shopify partners with Spotify so artists can sell products

There’s been something of a price war between rival HD DVD and Blu-ray player manufacturers of late, but until now, dual format players haven’t followed suit.

This may be in response to Samsung’s recent announcement of their BDP-UP5000 player, expected to retail for around $1,049. 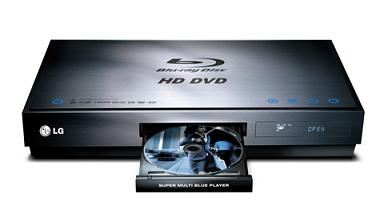 Will the rival Blu-ray and HD DVD camps make peace this side of Christmas (or even emerge from their trenches for a festive football match emulating the British and German troops in World War I? Not likely. Their battle will continue at full pelt until someone loses – mainly all the poor punters who plumped for the wrong format.

Just when it seemed that the high definition optical disc format war was over, thanks to the first combo player, along comes the HD DVD forum and states that the player can't be called HD DVD certified. Well, that hasn't…

So, the rumours were correct then. LG has unveiled its ‘Super Multi Blue Player’ (or, more prosaically, the BH100) which can play both Blu-ray and HD DVD discs. It’s going on sale by the end of March in the US,…