A creepy new female robot called Yangyang has been unveiled in Beijing at the Global Mobile Internet conference - a conference aimed at getting younger people into robotics. A joint project between Japanese robot guru Hiroshi Ishiguro and Shanghai robotics professor Song Yang, the young robot can shake your hand and accept a hug. Dressed in…
1st May 20153rd October 2020 Chris Price Robots

Here’s another vague threat for The Pirate Bay to laugh in the face of – the International Olympic Committee wants the Swedish piracy-enabler to remove all copyrighted Olympic content from its comprehensive listings.

The IOC has requested assistance from the Swedish government, asking the Minister of Justice to help force the Bay…

Back in the days of Chairman Mao China was really not big on capitalism and sneered at what it saw as the decadent west chucking its money around on pointless consumerism. Things have changed now though, and China is a total sell-out. It’s like they’re the band who were in it for the music but at the first whiff of cash signed to a major record label and slapped its logo on everything in order to score some cash. Sure, the band doesn’t have any principles, but at least it’s making a lot of money and can buy lots of nice things because of it.

The Olympics is proving even more lucrative for China, with Lenovo producing a line of… Olympic-themed flash drives…

The International Olympic Committee (IOC) has announced that it will be showing news and sports highlights from the Beijing Olympics in countries where no broadcaster has exclusive rights. The Video on Demand service will be available on a YouTube channel.

That means some 75 countries, including India and Nigeria, will be able to watch the best bits of the Games, as determined by the IOC. The channel will be “geo-blocked” so that those of us in countries where a TV broadcaster is already showing coverage of the Games won’t be able to access the YouTube footage.

Since the BBC will be near-exhaustively covering the Games, official YouTube clips won’t be available in the UK.

If you're already getting a bit excited about watching the world's finest athletes wheezing their way through the Beijing smog, our lovely BBC has the perfect internet accompaniment for you. The Interactive Map has icons representing each Olympic venue hovering…

Just like McDonald’s first restaurant in Russia all those years ago, news that Apple is to open its first store in China shows how much progress the company has made since its beige days in the late ’80s and early ’90s.

Tomorrow, Beijing will host a new Apple Store, featuring the same sort of design as you’d find in any other location, but with a multilingual Genius Bar…

Chinese authorities seem to be gradually lessening their censorship rules to keep the IOC happy, with Wikipedia popping up for those stuck on the other side of the ‘Firewall of China’.

Select English-language pages now appear for vandalism, although try looking up ‘Tiananmen Square’ or ‘Tibet’ and you’ll still be greeted with an error message. Also, the Chinese-language pages are still blocked, so it’s either a temporary glitch in the awesome-sounding Golden Shield Project, or we’re seeing China start to appease foreign visitors… 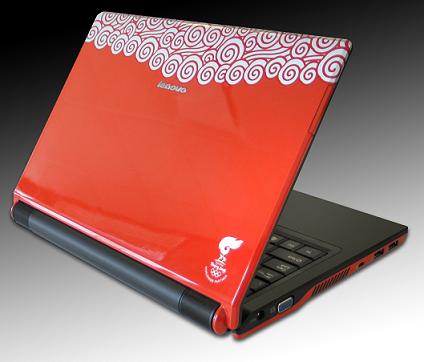 Lenovo is reprising their competition from August which showed several of their limited edition Olympic Torch-inspired notebooks, by launching three online charity auctions in the UK tomorrow to commemorate it being six months until the 2008 Beijing games.

Each of the Lenovo 3000 V200 12.1-inch widescreen notebooks will be signed by the British silver medalist Gail Emms, and features… 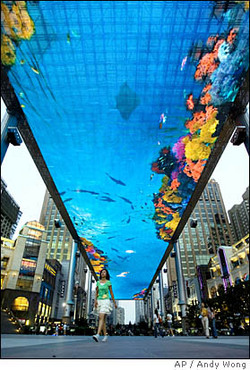 It’s not a real fishtank, of course. It’s a 250x30m LED screen (well, five screens connected together) in Beijing, hanging 80 feet up in the air. It shows a variety of colourful fish swimming about, presumably to encourage shoppers to feel relaxed enough to buy more – it’s in a shopping mall.