Consumers could be more than twice as likely to choose poor-quality products when shopping online if they have been boosted by fake reviews, a behavioural experiment from Which? has revealed.

The consumer watchdog simulated fake reviews and endorsement labels and found they were hugely effective at manipulating consumers into picking Don’t Buy products – items that Which?’s independent lab tests have found to be of such poor quality that they should be avoided at all costs – instead of better quality alternatives.

Which? found that every single one of the fake review scenarios it tested had adverse effects on consumer behaviour and, in the worst instance, demand for products boosted by these techniques increased by more than 136 per cent.

This overwhelming evidence of the damaging impact of fake reviews on consumers reinforces the need for the Competition and Markets Authority’s (CMA) recently announced investigation into misleading online reviews and why the regulator must take the strongest possible action against sites that fail to tackle this problem.

Which? asked almost 10,000 people to complete a shopping task using images designed to look like the Amazon website. Pages and content that were shown to participants as part of the survey were not real Amazon pages or content. Amazon was chosen as it is the UK’s largest online shopping platform and was likely to be familiar to the greatest number of consumers – but Which? believes the findings of the experiment are equally applicable to other online platforms hosting user generated reviews.

Respondents were asked to pick one of three product types – headphones, dash cams or cordless vacuum cleaners – where Which? has previously found evidence of fake reviews.

They were then randomly allocated into one of six groups to determine the type of fake review activity they would see, varying from inflated star ratings to fake review text – tactics commonly used by unscrupulous sellers – as well as the addition of a platform endorsement label, which can often be influenced by high review ratings.

Participants were shown five identically-priced products in their chosen category: a Which? Best Buy, three ‘fillers’ with mediocre reviews and a Don’t Buy which may or may not have been manipulated by fake reviews. They reviewed the information about the five products, including seven reviews for each, before deciding which they would most like to buy in real life.

In the group that saw no fake reviews, one in 10 people (10.5%) chose a Don’t Buy product. However in the group where fake review text was added to this product, with phrases such as “oh…WOW! I love when I’m about to review an awesome product” alongside inflated star ratings pushing it up the search results, this jumped up by more than double (120%), as 23 per cent of people were duped into choosing the Don’t Buy product.

The situation was even worse when a platform endorsement label was added to fake review text and inflated star ratings. It further increased the proportion of people choosing the Don’t Buy product to a quarter (25%), a 136 per cent increase to the group that wasn’t exposed to any fake review activity, demonstrating the risk of consumers being misled by a recommendation label underpinned by fake reviews.

This is particularly concerning given previous Which? research found the Amazon’s Choice endorsement label being applied to potentially poor quality products that appeared to have been artificially boosted by incentivised and fake reviews.

In its behavioural experiment, Which? found that simply increasing the average star rating and number of reviews on the Don’t Buy product, thereby moving its listing to the top of the search results display page at the expense of other products, led to about one in six (16%)  people choosing it, still an increase of 55 per cent versus no fake activity.

One group was even presented with reviews containing admissions that reviewers had been incentivised to leave positive reviews, with phrases such as “Very happy! Just waiting for the free gift as promised” and they “asked me to change my review to 4 or 5 stars” and signs that positive reviews of completely different products had been hijacked. Despite this, 22 per cent of the participants still chose the Don’t Buy product, a leap of 105 per cent versus those who saw no fake review activity.

Consumers concerned about the authenticity of reviews left on a product, when they are looking at websites, are encouraged to report this to the online platform so that it can investigate.

The CMA has estimated that £23 billion a year of consumer transactions are influenced by online reviews and Which? believes that review platforms must take more responsibility and make improvements to their systems to halt the scourge of fake reviews and stop consumers from being manipulated.

“Which? has found categorical evidence that people are at huge risk of being misled by fake reviews, which is particularly worrying given people are shopping online more than ever during the coronavirus pandemic.

“Online platforms must put more effective measures in place to stop unscrupulous sellers gaming the system with ease, otherwise the CMA needs to take strong action against these major sites.”

Jeff, 72, wanted to buy a thermometer off an online marketplace in order to check himself for potential Covid-19 symptoms. He told Which?:

“Conventional thermometers were in very short supply but there were posh looking ones with rave customer reviews so I selected the one with the most five-star reviews. It arrived promptly and an £8 voucher was included, valid if I too gave the thing a five-star review. When I tried it out it didn’t work. At least, if I took my temperature five times, it decided I was five different people, with temperatures ranging all over the place. I decided to return the thermometer and the voucher. I’m furious that companies are allowed to tout for five-star reviews in this way. Reviews used to be so dependable and balanced: often you’d see only negative reviews. These days it all looks like marketing.”

Grant, 45, bought two retro games consoles for his children on an online marketplace, the item had received 1,700 ratings and an average of 4.5 stars, but he told Which?:

“On receiving the consoles I was very disappointed to receive in the packaging a solid plastic business card with the following text on it. ‘Dear Customer: If leave a positive review, you will receive a gift card of £15 /15Euro / C$15 / $15. Please send the review & Order ID to the email address on the back. Thanks for your attention.’ How can we believe reviews and trust them if people are effectively being paid by the supplier to leave favourable reviews of their product?”

“We want Amazon customers to shop with confidence knowing that the reviews they read are authentic and relevant. We have clear policies for both reviewers and selling partners that prohibit abuse of our community features, and we suspend, ban, and take legal action against those who violate these policies.” 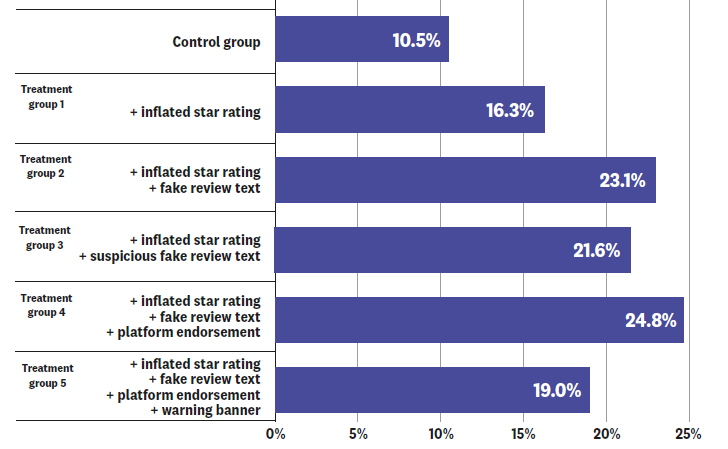