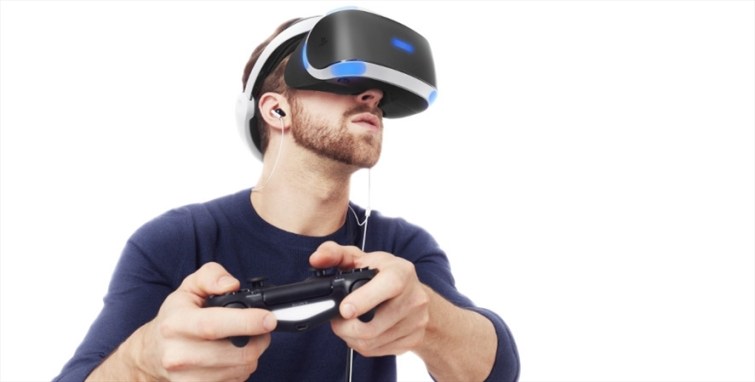 For a long time, virtual reality was the preserve of geeks and techophiles looking to show off that they owned the latest hi-tech gadgets. However, that has begun to change with VR looking set to become mainstream in 2018 as prices fall and VR content improves through channels such as You Tube VR.

The technology is now becoming increasingly widespread in businesses such as car showrooms to showcase the latest vehicles without the need for a test drive. It’s also becoming popular in travel agents to bring alive various holiday destinations without looking at still images in a brochure or on a computer screen.

In the home, too, you won’t just use VR for playing computer games either (although there is plenty of VR gaming choice). Thanks to virtual reality you can enjoy playing everything from roulette to blackjack against other users without having to get dressed up in a suit and tie to visit a real casino! See casinolounge.co.uk for more information.

Other VR applications include being able to re-live important events, such as your wedding, in VR and tour famous buildings, such as Abbey Road Studios, where The Beatles recorded.

But what do you need to enjoy virtual reality? Really there are two options at present. At the cheaper end of the scale there are mobile headsets which are little more than plastic or cardboard structures to house your mobile phone.

These include Google Cardboard and Samsung Gear. The downside of these is that because smartphones are not designed specifically for VR, the experience is never going to be as good as a proper VR headset.

Far better, if budget allows, is to invest in a bespoke VR device. Several are now available including the HTC Vive and Oculus Rift. Another model is PlayStation’s VR headset which is the first solution specifically for a games console.

However, not only will these devices cost you more than mobile phone VR, you will also need to hook them up to another unit, whether that’s a pretty powerful PC in the case of HTC Vive and Oculus Rift or a PlayStation 4 games console in the case of the PlayStation VR headset.

The good news is that coming in 2018 will be fully standalone devices such as the Oculus Go. Unlike Google Daydream and Samsung Gear VR 2, this won’t  require a separate Android phone to operate. Nor will you need to hook it up to a PC as you do with Oculus Rift and HTC Vive. 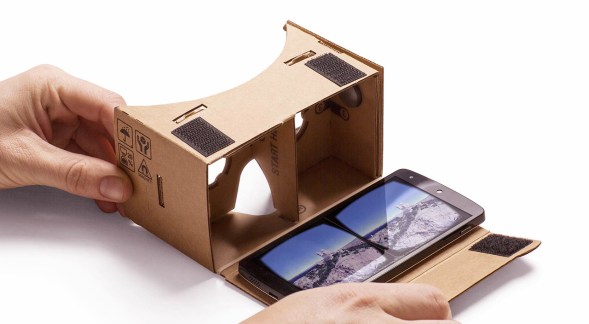 Designed by a couple of Google engineers in their down time (Google staff get a day of the week simply to develop new ideas) this is a pretty basic, but surprisingly effective, VR solution that’s ideal for the beginner.

As you can see from the image above, it’s quite literally a folded up piece of cardboard box for your phone. But, somehow, the lenses really do manage to create the feel of being in a virtual reality world.

Once the kit is assembled, a smartphone is inserted in the back of the device and held in place by the selected fastening device. A Google Cardboard–compatible app splits the smartphone display image into two, one for each eye, while also applying barrel distortion to each image to create a stereoscopic (“3D”) image with a wide field of view.

It’s compatible with almost all Android devices with apps such as Galaxy VR – which combines a space flying game with a first-person shooters – available via the Google Play store.

Although the Google Cardboard app is only currently available to Android users, some Apple enthusiasts have found work-arounds to get Google Cardboard working on the iPhone. See here for more details. 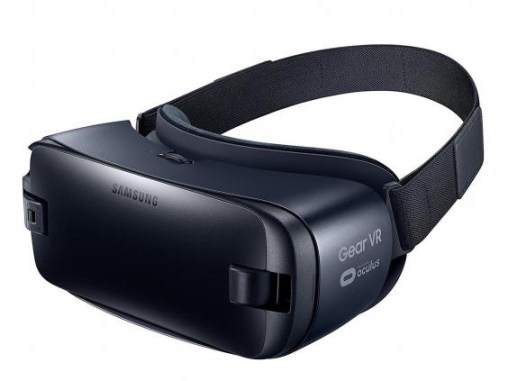 Designed to work with Samsung’s flagship smartphones including the Galaxy S8 and Galaxy S8+, the Samsung Gear VR is a mobile virtual reality headset developed by Samsung Electronics, in collaboration with Oculus, and manufactured by Samsung.

In terms of design, it is quite boxy, a little like an old Sega GameGear, but setting up is as simple as downloading an app and plugging in your phone. Apps available to download from the Oculus store include Gunjack and Hitman Go.

You can buy the Samsung Gear VR here 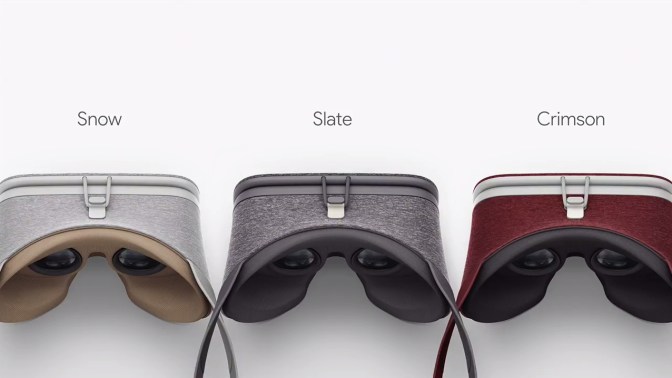 A great upgrade from Google’s entry Cardboard model, the Google Daydream is slightly more elegant than the Samsung Gear VR. Finished in a grey, white or red fabric (sorry slate, snow and crimson), it’s also much more comfortable to wear than some of the harder more plastic designs.

What’s more, unlike the Cardboard, it comes with a remote control which is handy for apps like Netflix VR, which gives you the full cinema screen experience in your living room.

However, as it’s relatively new, the Daydream has yet to build up that many apps and games yet. It also needs to be used with a Daydream ready phone such as the Pixel 2.

You can buy the Google Daydream from here. 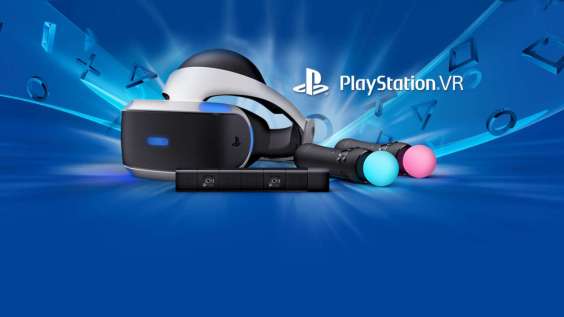 If you’re a gamer with a PlayStation 4 or 4 Pro console, and you want to get into VR, then PlayStation VR is certainly worth considering. It’s quite an attractive, futuristic design too with sleek white lines and flashing LED lights (they look nice, even if they don’t serve much purpose).

Although cheaper than some of its rivals, you will need to fork out for the PlayStation camera costing an extra £40 if you don’t already have one as it won’t work without it. Set up is simple but does result in a bundle of cables around the living room which isn’t ideal for everyone.

Either the television can mirror the picture displayed on the headset, or display a separate image for competitive or cooperative gameplay. PlayStation VR works with either the standard DualShock 4 controller or the PlayStation Move controllers.

Inevitably, where the PS VR does excel is in the number of games available, including a Farpoint, a first-person shooter, and Eve: Valkyrie, a multi-player space dogfighting game which is also available on the Oculus Rift.

You can buy from here. 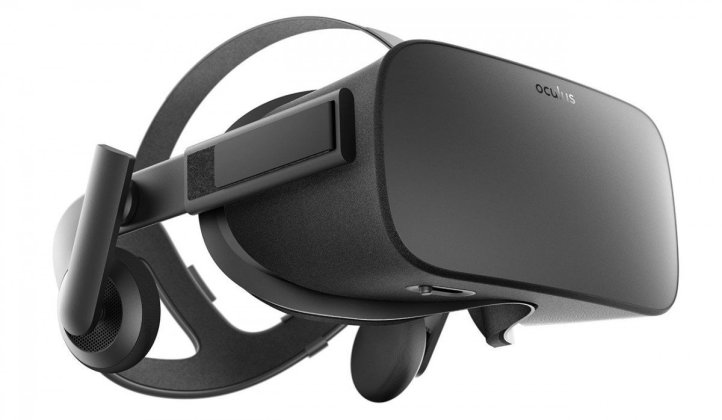 First announced way back in 2012, the Oculus Rift began life as a Kickstarter project before being bought by social media behemoth Facebook for a cool $2 billion.

Pull the comfortable headset on and Oculus takes over, putting you in a full 3D world. Turn your head or move around and the world stays put. You just see it from a different perspective or position, just like in real life.

Removable VR audio headphones complete the experience by delivering pin-point precise audio to add a real feeling of space and proximity to games. However, they can be easily removed if you prefer to use your own headset.

With a fairly understated black design, the headset is perhaps not as stylish as Sony’s but it’s comfortable enough. What’s more, the Oculus Touch controllers are very responsive.

In addition to games offering VR support, Oculus has over 40 games made specifically for the platform, from deep-space exploration to zombie survival. With a price tag of around £399, the Oculus Rift has come down in price since launch and would make an ideal Christmas gift for the gamer in your life.

You can buy Oculus Rift from here. 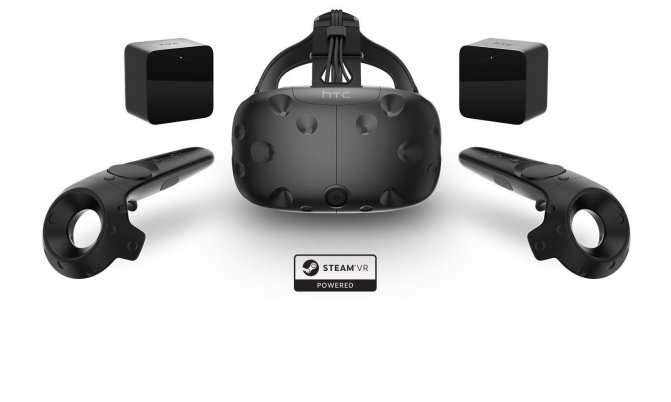 Developed by HTC and the Valve Corporation, the HTC Vive has been on sale around a year and is the currently the most expensive VR consumer solution on the market right now.

Unlike the Oculus Rift, the headset uses room scale tracking technology with two infrared tracking stations located in opposite corners of the room to monitor the movement of the player. This allows the user to move in 3D space and use motion-tracked handheld controllers to interact with the environment.

Although this means you really will feel part of a VR world in a way that other handsets can’t quite match, the downside is that room-scale experiences require a large amount of empty space for the player to walk around without the risk of bumping into real-life obstacles!

In a typical home, this can require an entire room to be dedicated solely to room-scale VR, which may not be practical for many people. Although you won’t have to buy a whole host of additional accessories to use the HTC Vive to its full potential, you will need a high-spec PC.

The bundle includes a headset, motion controllers, and external sensors for setting up a virtual room to play in. There isn’t quite the variety of games available as there is for the PS VR. However, there are enough to keep most gamers entertained.

You can buy from here.