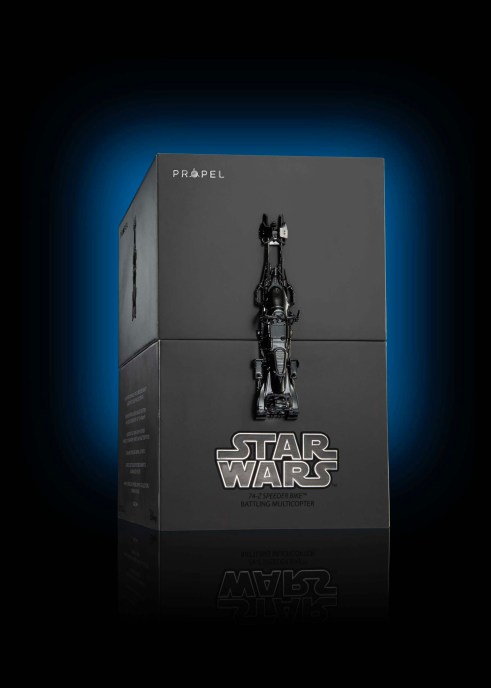 The new drones allow for live air combat games so that up to 12 fans can battle each other for the first time ever. Unique patented technology and a first ever training ‘companion’ app mean users can perfect their technique with maximum control (and limited damage to drones!)

The T-65 X-wing Starfighter, Darth Vader’s TIE Advanced x1 and a 74-Z speeder bike comprise what will be the first edition in a series of high-performance battle drones launched by Propel to bring the ultimate flight experience to Star Wars fans in over 25 countries. 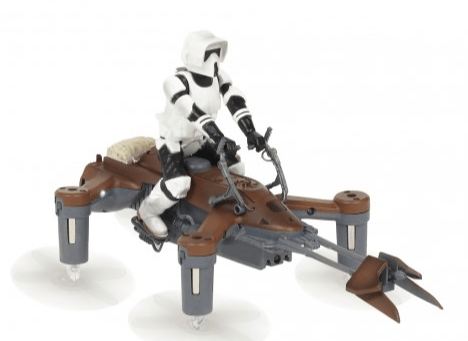 All three quadrocopters boast flying speeds of more than 50 km/h and a whole raft of technical innovations, such as Li-Fi technology which is integrated into a drone and which enables a new dimension in “real-time play”.

Special manoeuvres like corkscrew rolls in forward flight and innovative reverse propulsion drone technology enable the craft to reproduce the famous flight action in Star Wars and maximise the fun and thrill of flying for the pilots.

The only thing left to do is select the model and choose between the “dark side of the Force” or affiliation with the Rebels.

This first quadrocopter edition comes in a presentation box with a wax seal and a three-dimensional scale model of the craft on the front.

When the top of the box is opened, the box lights up and various soundbites and the Star Wars theme tune is played through loudspeakers which are integrated into the box. Each box and drone has a unique serial number.

Propel will also be launching the first in a series of companion apps on September 1st. The initial release will be a flight simulator with 34 training modes to train you from cadet to admiral status. The app syncs your remote controller (hand device) to your phone via Bluetooth and movement mimics the actual live flight experience allowing you to perfect your performance, before taking on others in battle.

The app also includes an innovative IAT “intelligent awareness technology” which during real time game play battles knows your exact position in the game and coaches you how to win the battle and defeat others.

The limited edition Star Wars Laser Battle drones are available exclusively from John Lewis at a retail price of £199.