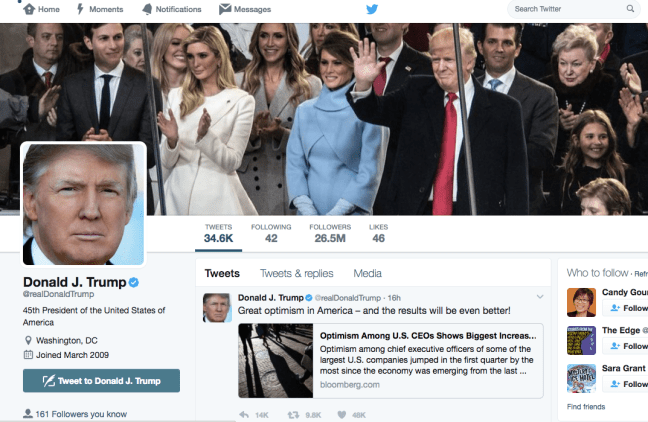 Heaven help us. As if the guy doesn’t get enough publicity for his frankly insane social media activity, YouGov has unveiled a new website – TweetIndex.YouGov.com – showing how people rate each of Donald Trump’s tweets.

YouGov TweetIndex is a new site that shows how the public reacts to a tweet’s content. To showcase the service, YouGov is measuring the reactions of a representative sample of 1,000 people to the President’s Twitter statements.

To understand how people perceive his tweets, YouGov asks respondents to rate them on a five point-scale from ‘Great’ to ‘Terrible’ on the day of their publication, with results being published on the site within 48-hours. The site also allows users to explore how sub-groups like Democrats, Republicans and Independents respond to every tweet.

“Twitter is a platform like no other – allowing people to communicate their outlook unfiltered to the world. And no one showcases this better than President Trump. Everyone knows what he says on Twitter, but YouGov is providing unique data on how people are responding to his tweets.

“Some think they’re great while others think they’re terrible, but very few sit on the fence. YouGov will be the chronicler of Trump’s America, allowing us to look at how each of his pronouncements resonate with different groups. Given their power, the president’s tweets deserve to be assessed – and measured – alongside his other public statements.”

So how does it work? At the end of every day, YouGov shows a representative sample of US adults the tweets sent in the past 24 hours by President Trump. They are asked to rate them on a scale “Great”, “Good”, “OK”, “Bad” and “Terrible” (scored from +2 to -2). The reported score is the average rating multiplied by 100.