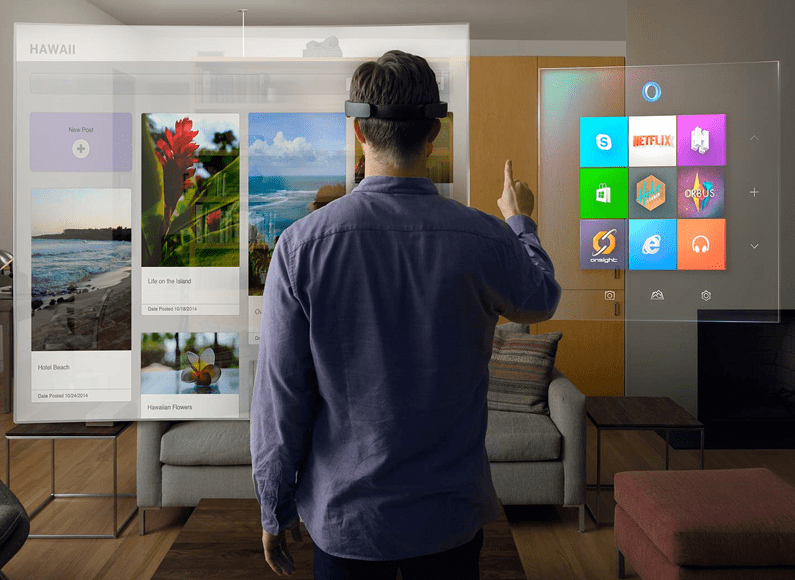 Last night Microsoft wowed us with a demonstration of a new product it is calling “HoloLens”. Check out the video to see what I mean – with virtual screens, data and even Minecraft worlds being overlaid on top of real life.

So the premise is pretty clever: Think a combination of an Oculus Rift VR headset, with Google Glass – to create some complex augmented reality. Who couldn’t fail to be impressed? This is seriously mindblowing stuff – surely, we have had a glimpse of the future?

Whilst it looks great though, I’m going to approach this with a healthy scepticism. After all – the slick video above is merely a simulation, and other than that, there is no real evidence of how much progress Microsoft has made towards making HoloLens an actual viable product.

Sure, a handful of journalists have apparently had a go behind closed doors – with no recording equipment allowed, but even these reports talk of prototype headsets rather than the slick visors we saw last night. And even then, a demo in the controlled conditions of Microsoft headquarters is going to be vastly different to the real world. For a start, how come nobody in the video has a messy house?

By the same logic, I could show you a clip of Avengers: Age of Ultron and then tell you about the Iron Man suit I’ve nearly finished building in my shed. The fact that all it is currently some old paint tins with holes cut in them just means we’re still in development.

In fact, we’ve been here before, with the demo not living up to the final product. Back in 2009, in a blaze of publicity Microsoft announced its Kinect camera – complete with the below flashy video showing how soon we’d all be doing flips around the living room and driving cars using our hands, whilst surrounded by our photogenic family.

When Kinect was finally released, it was a long way away from this vision. The camera was low resolution, the technology never quite worked as perfectly or precisely as you wanted it to, and a huge lack of games that supported the tech. Even the more recent launch of Kinect 2, which was initially bundled with the Xbox One has gone from a world-changing revolution to a footnote in the history of Microsoft’s latest console. Despite a huge launch, and this new, innovative method of control, ultimately Microsoft was forced to do a mea culpa and go back to extolling the virtues of games played with its controller.

It isn’t just Microsoft too – as we saw recently when Google Glass was finally canned by Google. Again, compare the expectations in this early video with the reality: That nobody wanted to wear a stupid headset.

So forgive me, but will a weird headset that is reliant on super accurate motion and voice controls really be any good? I’m going to need more than a flashy video to convince me otherwise.

The counter argument to this, of course, is that all first generation products are a bit rubbish – but ultimately can change how we behave. Look at the first iPhone – it didn’t even have 3G – but now ‘weird’ touchscreen phones are the norm. Could the HoloLens do the same for VR? Perhaps, but don’t forget the barrier to the weird new activity involves not having it in your pocket, but wearing it on your face.