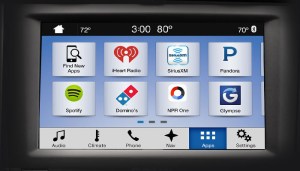 While most of the attention was focused on the Ford GT last week, at the North American International Automobile Show, in Detroit, Ford also took the opportunity to show off the new SYNC® AppLink™ 3.0, which allows projection of moving graphics, such as apps, from your smartphone onto in-vehicle touch screens, as well as control of apps through voice.

Basically turning the in-car touch screen into a phone, Ford, in collaboration with Alibaba Group, is using SmartDeviceLink to combat the amount of drivers looking at their phones whenever they hear a notification, for obvious safety reasons.

SmartDeviceLink technology makes it easier for developers to create smartphone apps that are compatible with communications and entertainment systems in cars. It’s aiming to standardise and simply the development process, as well as expand availability of in-car apps, so that more of your favourite apps will be available in the car.

SYNC already allows drivers to pair their mobile phones with a vehicle and control the radio, make and receive calls, and operate more features hands-free using voice controls, to the extent that announcing ‘I’m hungry’ will bring up a Michelin restaurants guide. By making AppLink software accessible to mobile app developers, Ford is providing a platform to make apps respond to voice commands through SYNC 3.

At NAIAS, Joe Beiser, Ford director, Connected Services for Europe, Asia Pacific and Africa said: ‘With each new version of AppLink, we’re improving the in-car experience with better integration of smartphone apps and easier ways for customers to access and control the content they love.’

Ford has rolled out its AppLink technology globally, however SYNC® AppLink™ 3.0 won’t be available in Europe until later this year, unfortunately.