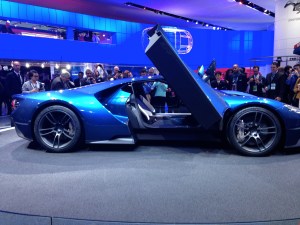 At the North American International Automobile Show, in Detroit, last week, the words on everyone’s lips were ‘Ford GT’, and, with thanks to Ford, we got to see it in the flesh at an incredible press conference that blew our minds. However, while the car was incredible-looking, can it measure up to its more experienced counterparts?

You could feel the anticipation building at the Joe Louis Arena before the executive chairman of Ford (and great-grandson of Henry), Bill Ford took to the stage, and, on announcing the new supercar, the crowd went wild. On looks alone, the GT really did confirm Ford’s sentiment that ‘innovation has always been at the centre of what Ford is all about’. 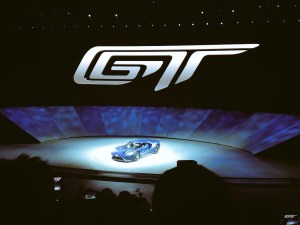 The GT prototype, seen above in all its glory, is made entirely of hand-laid carbon just like its rivals, Lamborghini and Acura, as well as active aerodynamics, AND either ‘the best’ or ‘among the best power-to-weigh ratios of any car’, courtesy of that carbon structure and its 600bhp, twin turbocharged V6 engine. Yep, the same V6 hybrid EcoBoost engine that was cited as being ‘too quiet’ for F1 fans last year, and, thus, rarely making an appearance in supercars.

Ford’s argument for opting for the V6 is that the car company is launching a new sporty sub-brand, Ford Performance, as well as rolling out its Ecoboost-branded, high efficiency cars across the world. This means that the Ford GT has the tricky task of acting as poster child for both programmes, and interestingly showing that supercars can be eco-friendly too.

Despite the appearance of a concept car, production of the Ford GT is due to begin later this year, so that the supercar can be on the road in time for the 60th anniversary of Ford’s extraordinary run of four straight wins in the Le Mans 24 Hour race, starting in 1966. Fitting, as having beat Ferraris and Lamborghinis in the ‘60s, American Ford is clearly attempting to release a supercar to compete with the European brands again. 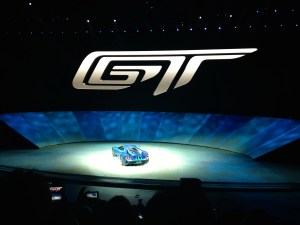 Designed in secret in less than a year by Brit Chris Svensson under the direction of May’s successor Moray Callum (brother of Jaguar design director Ian), it will have taken less than 24 months for the whole process to be completed, if Ford does manage to get the car into production in time. This would be INCREDIBLY quick, if you bear in mind that Honda took three years to complete its pre-production Acura NSX that it showed off at NAIAS only to get blown out the water by Ford.

Pricing hasn’t been confirmed yet, although we’ve been told that it will be cost ‘somewhere between a Ferrari 458 Speciale and a Lamborghini Aventador’, meaning between £208,000 and £265,000, so Ford obviously believes it has a shot in the supercar world. We’ll just have to wait and see whether people are prepared to fork out that kind of money for a Ford supercar.