Nokia has announced a brand new Android tablet at the Slush conference in Helsinki – a first for the company after the separation with Microsoft. 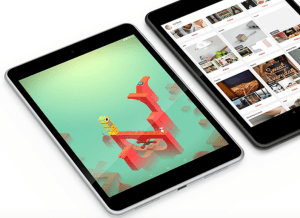 The Nokia N1 is a 7.9″ tablet, which has a laminated screen (for reducing glare), and is powered by an impressive 2.3ghz 64bit quadcore processor with 2GB RAM. There’s 32GB of storage and the screen runs at 2048×1536. There’s also an 8MP camera on the rear, and 5MP on the front. The case is made of sandblasted aluminium, and it weighs just over 300g.

On the software side, the tablet runs Android Lollipop but with Nokia’s own “Z launcher” on top – which lets users “scribble” on screen to access apps – simply draw the letter and it will display relevant apps. For example, drawing the letter “e” will show Evernote and other “E” apps. The launcher will also learn what apps you use and display contextually relevant ones: For example, it will learn what apps you use at home in the morning, and at the office at lunchtime, and change which apps are on the home screen by default. If you don’t want to splash out on a new tablet, this homescreen launcher is also now available for free on the Google Play store for any Android device.

The move marks a huge turnaround for Nokia, which earlier this year sold its mobile division to Microsoft. It appears though that it used the opportunity to jump ship to Android. The ‘new’ Nokia is apparently making a fresh start – with the guy on stage repeatedly insisting that it was a “small” start – and how the company will be partnering with a Chinese firm Foxconn to do the manufacturing, rather than leaving it to Nokia to manage in-house.

The Nokia N1 will be hitting China in time for Chinese New Year (February 19th) and rolling out to other countries shortly after. It looks set to retail for $249+tax, which is about £160 – so we reckon it’ll cost you £200 over here.