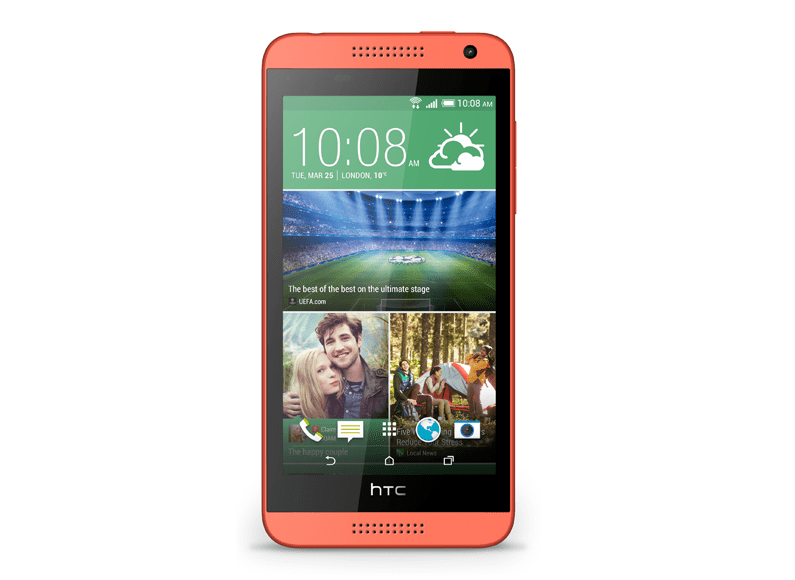 HTC seems to be attempting to cover all bases with its smartphone releases this year, and the Desire 610 is firmly aimed at the middle of the road. At around £240 SIM-free, it’s one of the cheapest smartphones HTC offers, but there’s stiff competition from other manufacturers in this price range, and it just doesn’t match up.

On first impressions, this phone feels like a toy. It looks like something you’d give your child so they can pretend to use a smartphone. It’s thick, chunky and plastic-tastic. The sides and front have a matt finish, while the back is shiny – and therefore gets covered in smudgy fingerprints almost instantly. Just like – oh, a child’s toy.

It’s available in a rather patriotic choice of red, white or blue – unusually for HTC, there are no black, silver or grey options. Colour choices are always appreciated, especially when you work in an office full of near-identical glossy black slabs, but it does seem like HTC could have been a bit more creative with the options. 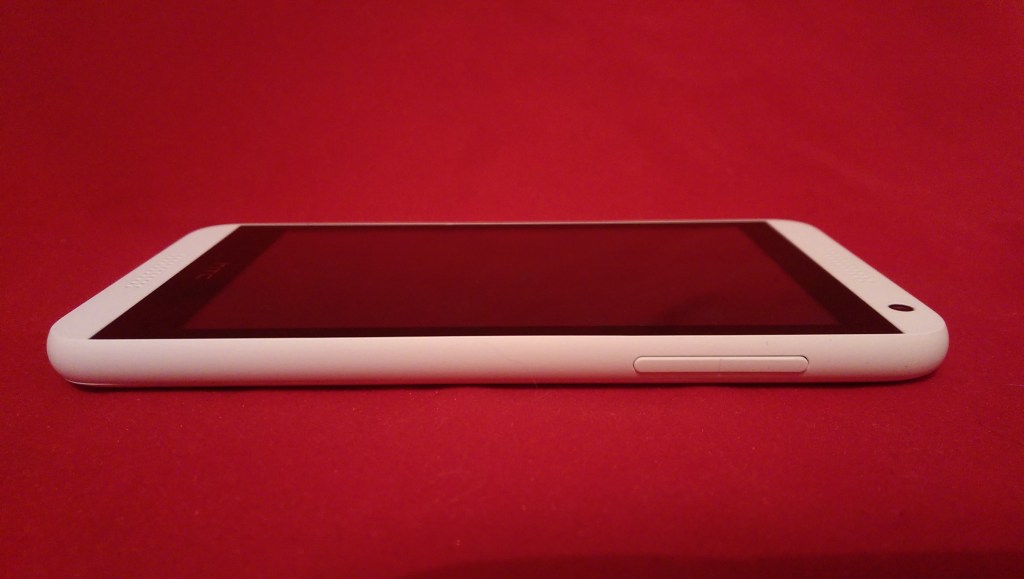 Unsurprisingly for a plastic-based handset, the Desire 610 is light for its size at 144g, and it is quite big – only slightly smaller than the HTC One M8, despite having a 4.7” screen in place of the M8’s 5”. This is partly down to the very large bezel (black border) around the screen, and the two front-facing BoomSound speakers.

Front-facing speakers are one of HTC’s points of difference over other smartphones, and it always surprises me that more manufacturers haven’t followed suit. Having to place your phone screen-down to hear the music properly doesn’t make any sense. That said, after experiencing BoomSound on other HTC handsets, these were a disappointment. The sound is thin, tinny, and doesn’t go up as loud as pricier phones – plus you can feel higher volumes vibrating through the plastic casing. It’s not terrible by any means, but if you’re looking at buying these on the strength of the BoomSound reputation, don’t. 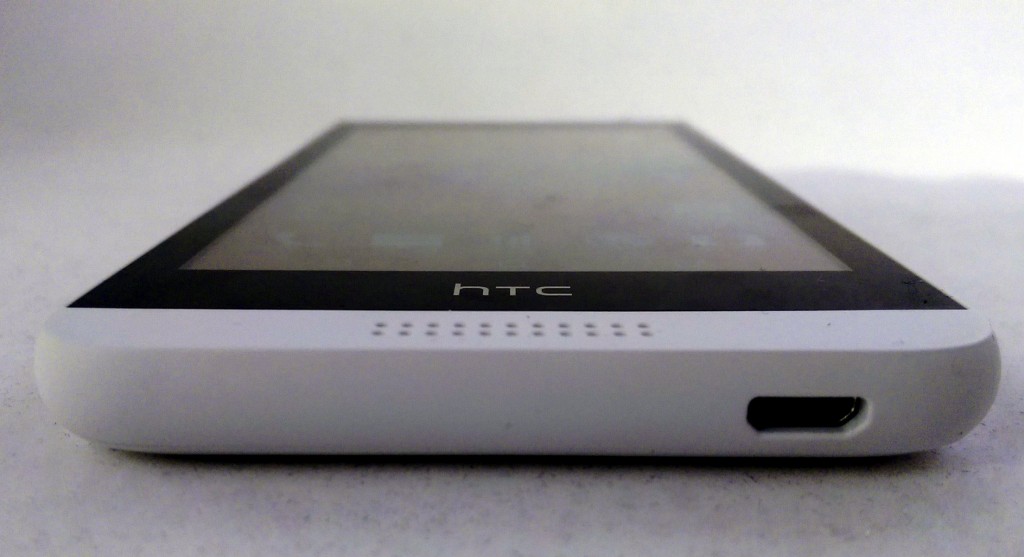 The Desire 610 comes with an exceptionally stingy 8GB of onboard storage, which thankfully can be expanded with MicroSD cards up to 64GB. This is clearly one of the ways HTC has cut cost on this handset, but you have to wonder if it’s worth the saving when you’re inevitably going to have to fork out for an expansion card before long.

On the bright side, the Desire 610 offers 4G LTE and uses the increasingly standard nano SIM format. It also optionally includes NFC for easy data transfer.

Like its HTC stablemates, the Desire 610 runs Android 4.4 (KitKat) with the HTC Sense 6 interface over the top. The flatter, more colourful Sense 6 is simple and charming, with some handy new features and the inevitable HTC BlinkFeed.

BlinkFeed is HTC’s Flipboard-esque hub for news, articles and social updates. It’s pretty divisive, with some users finding it immensely useful and some – like me – finding it a bit pointless. Still, if you’re looking for a single aggregator of news stories, images, updates from social sources including Facebook, Twitter, Instagram, Google+ and LinkedIn, and articles HTC thinks you might like (as with Facebook, it’ll prioritise content by how much engagement it gets), then this might be for you.

You can swipe right to customise the kind of content you see and which networks it pulls in, and swipe either way on a news story to see more stories. New to Sense 6 is the ability to turn BlinkFeed off, which sits well with HTC’s reputation as one of the phone manufacturers with the least bloatware. By default, Sense 6 and therefore BlinkFeed use a pastel green colour, but you can adjust this in Settings > Personalise > Theme.

New features of Sense 6 include swiping down with two fingers on the status bar to open Quick Settings, a range of weird vanity-boosting photo features like anti-shine, eye enhancement and face thinning (though none of the exciting ones from the M8, ie. 3D effects and focus-shifting), and the very handy Extreme Power Saving mode. This turns the phone into a basic model that can only use the stock calls, texts, email, calendar and calculator apps. You can’t do anything else at all until you turn this mode off. It definitely lives up to its promise of making your battery last far longer, but it’d be nice if you could choose things like Gmail or WhatsApp instead of the stock apps.

As with all the recent HTC models, the main navigation buttons for the phone are software rather than capacitive. I prefer a capacitive button, but this seems to be a big push with KitKat, so I might have to let go as I did with physical keyboards back in the day.

The Desire 610 packs the same processor as the HTC One Mini 2, namely the quad-core 1.2 GHz Qualcomm® Snapdragon™ 400. This serves it very well, and I only noticed minimal delay when using more power-hungry apps. This is one place HTC haven’t skimped, and it pays off.

The display is one of the really big drawbacks of this phone. It’s qHD, or rather quarter-HD (not to be confused with quad-HD or QHD), which is quite literally what it sounds like: a quarter of HD resolution (960×540 vs the HTC One M8’s 1920×1080). This is what my HTC Sensation had all the way back in 2011. Yes, this is a budget handset, but that’s no excuse for such an outdated display. This means that photos you’ve taken with the phone often look better when you’ve transferred them off it, onto a device with better resolution – at which point you notice that the screen also over-saturates colours somewhat.

You do get used to the display quality after a while, but don’t put this phone next to anything HD if you don’t want to hate yourself for buying it. Text is readable and it’s a good size, but at just 235 pixels per inch, it’s poor even considering the price. After all, most of the Desire 610’s competitors have HD displays at similar price points – perhaps HTC should have taken notes from the Moto G and put in a 4.5” HD screen instead of a 4.7” foggy mirror.

Screen brightness doesn’t go up particularly high, but it’s easy to read in bright sunlight and viewing angles are OK. Watching a fullscreen film on full brightness isn’t too bad – you soon get used to the display quality – but given that this isn’t even Gorilla glass, it’s hard to imagine what HTC were thinking.
The haptic feedback on this device is really odd. It’s adjustable, of course, but the default setting feels unusually springy, like the twang of a tight guitar string. I found it quite jarring at first but after a while, it actually made using the phone easier – I didn’t have to replace the stock Android keyboard with SwiftKey as I usually do. I’m not sure why it feels so different, but again, once you’re used to it, it’s not bad.

The Desire 610’s camera is fine. It’s not amazing and it’s not terrible. At 8MP with LED flash, the main camera takes clear, detailed pictures in good lighting, although predictably performs less well indoors and in lower light. 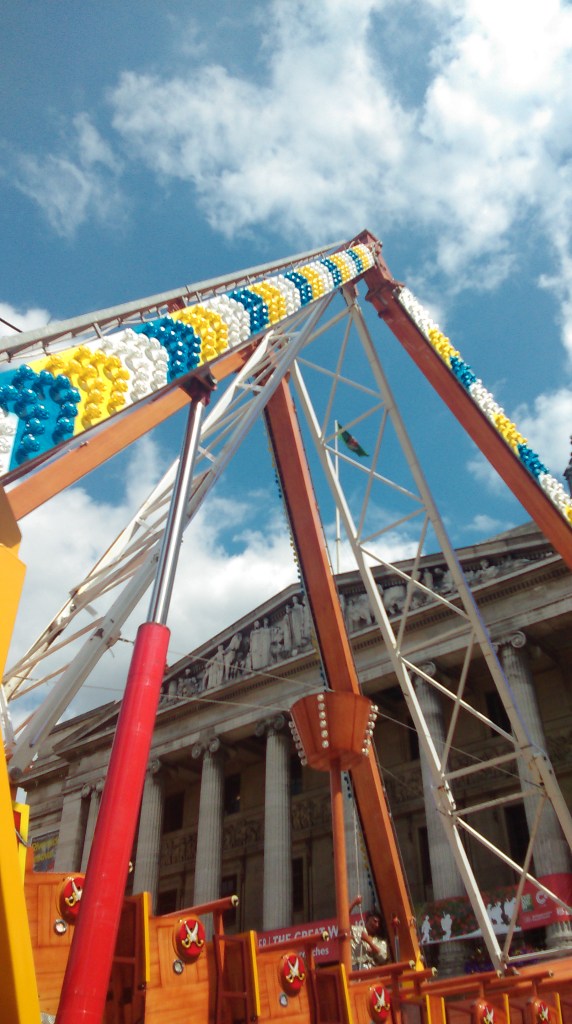 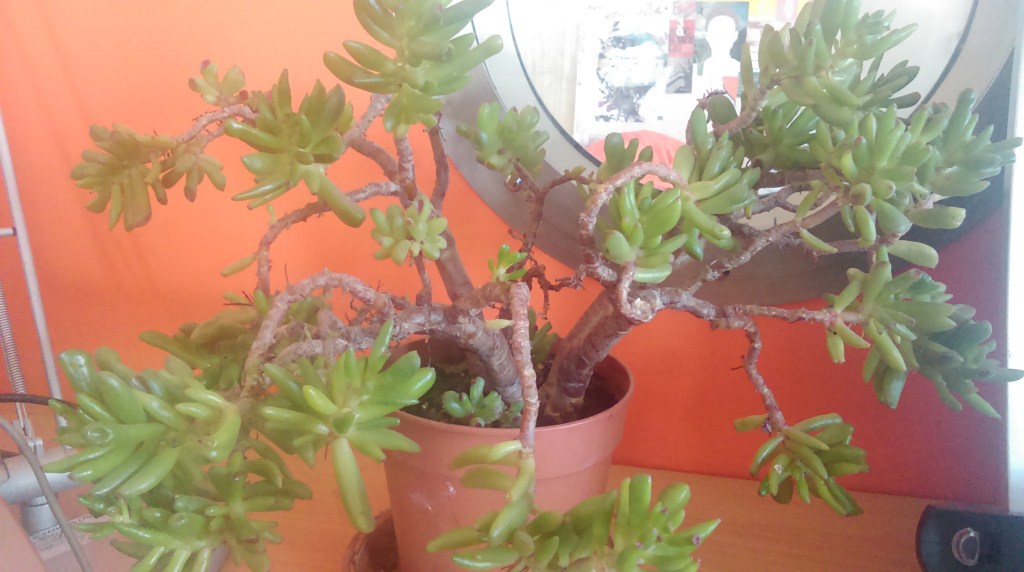 The main camera can actually record 1080p video, which is ironic given that the qHD screen can’t display it. You won’t want to record too much of that with only 8GB storage, in any case.

On less brightly-lit streets, the main camera struggled a lot with shadows. Turning on HDR mode solved this, although processing HDR images takes longer and it’s already not an instant-snap camera. 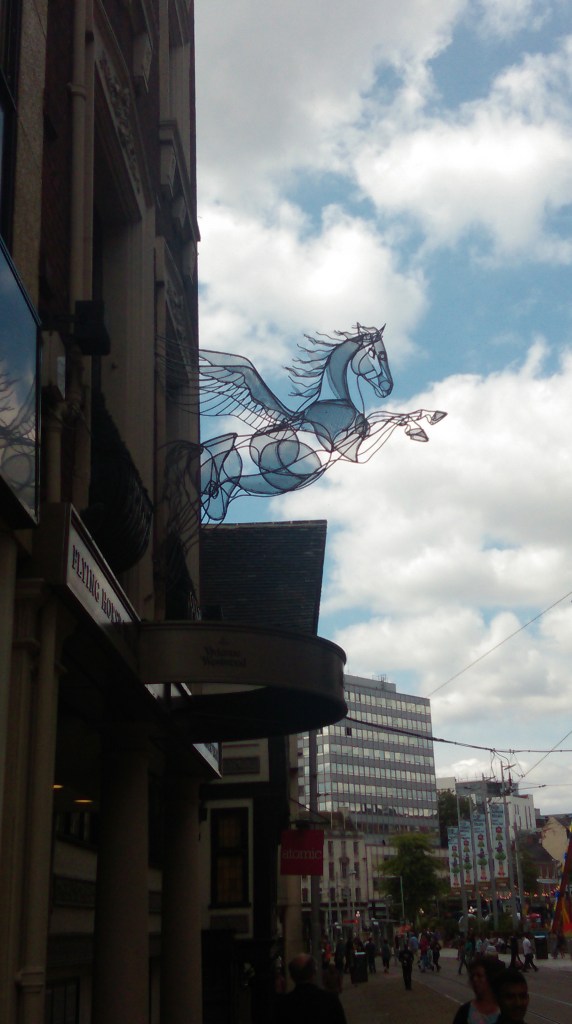 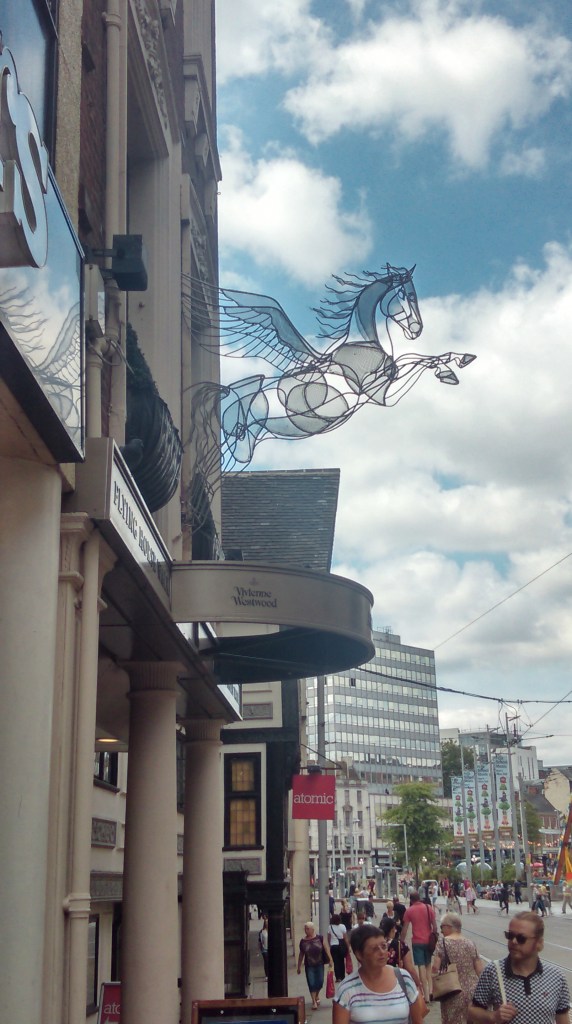 The front-facing or ‘Selfie’ camera (as it’s labelled in the camera menu) has just 1.3MP and records 720p video. Selfies taken with the front-facing camera are strangely zoomed-in compared with other phones – I had to hold it a lot further back than usual to get anything other than a screenful of face. The quality on this camera is OK for a front-facing, but if you’ve got used to some of the better selfie cameras out there, you might be disappointed. Again, it feels like a phone from a few years back.

The predictably non-replaceable battery on the Desire 610 packs 2040 mAh, which seems about right for this handset. After two hours streaming a fullscreen film over Wi-Fi with GPS enabled and maximum screen brightness, the battery depleted from 100% to 61%, which is comparable with other HTC phones. The One Mini 2 did slightly better at 65%, and the One M8 scored 66%, so the battery is a reasonable choice for this hardware. The plastic casing did get quite toasty during the film, though.

At normal use, the battery lasted the day easily, and is comparable to competitor batteries at similar price points (the Moto G has 2070 mAh, the Nexus 5 and Sony Xperia M2 both offer 2300). The main power-saving mode and the new Extreme version are both very useful in case of a juice crisis, but that didn’t happen with ordinary day-to-day use.

“Crafted to please your eyes, priced to please your budget,” say HTC of this phone, and I’m not sure I can agree on either score. It’s kind of charming to look at, but not in a way you could ever call ‘crafted’ (we’ll save that for the M8’s beautiful brushed aluminium), and although cheap, you can still get more for less from other phone manufacturers. A Nexus 5 will run you around £60 more, and includes a bigger, full-HD display, Gorilla glass and a stronger battery – plus the certainty that you’ll be first in line for Android updates (though HTC are usually good with this). On the lower end of the scale, a Motorola Moto G is over £100 less and still manages to pack in an HD screen (though it’s a little smaller), Gorilla glass and a similar-sized battery. It’s even got the choice of plastic surround colours. As far as I can see, there’s not much reason to buy this unless you’re a die-hard fan of HTC, you got a really spectacular deal, or it’s 2011.

One thought on “HTC Desire 610 Review: HTC’s attempt at a mid-range pocket-pleaser feels like a throwback”