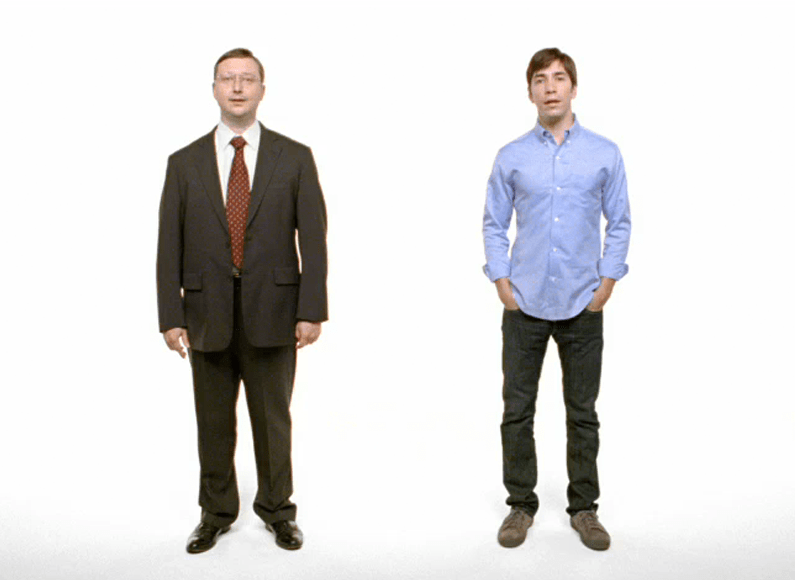 So what’s the news?

According to the press release the deal will bring “a new class of more than 100 industry-specific enterprise solutions including native apps, developed exclusively from the ground up, for iPhone and iPad” and “unique IBM cloud services optimised for iOS, including device management, security, analytics and mobile integration”.

What this means in human terms is that life will be made easier for big corporate users – with apps available that can make use of IBM’s big-business technologies, with all of the added security and cross-company reporting tools that it might entail.

Perhaps equally importantly is that Apple is rolling out new tools to help “enterprise” users manage the iPhones and iPads of potentially thousands of corporate users: A service called “IBM MobileFirst Supply and Manangement” will enable corporations to get their hands on loads of iOS devices and configure them centrally. This means that rather than have to setup apps on each phone individually, and have the phone tied to an individual user’s Apple ID, the IT department at Compu-Global-Hyper-Mega-Net (or wherever) can instead choose to load whatever apps are needed on employee phones, and grant them access to sensitive data (etc).

Apple has also announced that it will be offering AppleCare for Enterprise – to offer businesses specialist IT support.

Zzzz… so boring business people will be able to load up spreadsheets on their iPhones? What’s the big deal?

Its a big deal because this is something Apple has historically not been very good at – and represents a big shift in focus away from trendy hipsters. In fact, remember the “Mac and PC” adverts, where there would be a boring guy in a suit to represent PC and a trendy young person to represent Mac? It looks like Apple has just realised that it is 40, and whilst being in a band is funny its risky, so it should probably get a proper job.

More seriously, this is perhaps the latest in a series of moves by Tim Cook to think a little more about the bottom line. Even though he has said Apple isn’t just about the profits in the past, that’s what the investors want. And let’s face it – if you can get in with “Enterprise” usage, that is a cash-cow you can milk until it bleeds, as once companies adopt your system, it not only means thousands of more users in one go, but also it locks them into your eco-system. Here’s a photo the two companies have released showing Tim Cook speaking to IBM CEO Ginni Rometty about important business, no doubt. 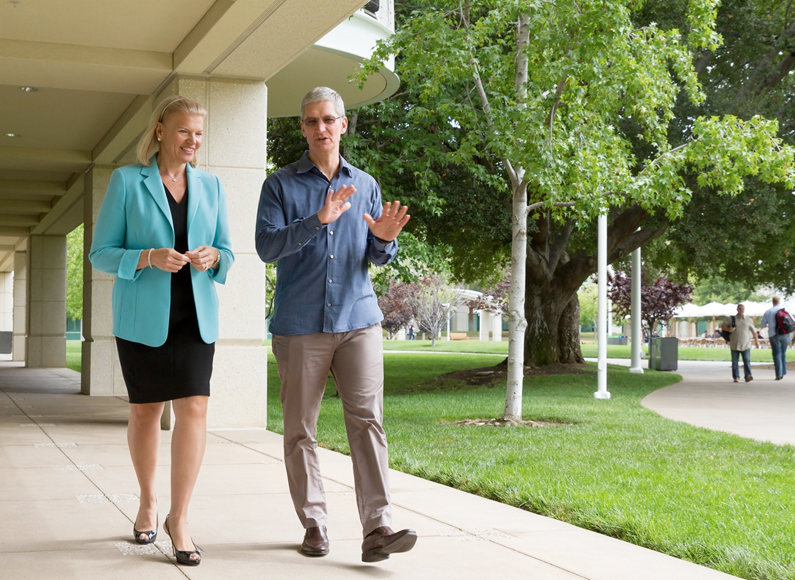 Oh, I think I get it… is Apple worried about its competitors?

Absolutely it is. Whilst in the battle for normal users Apple has lost market share to Android, it is still very much the coolest brand out there – not to mention still the most profitable, and still most popular with affluent users. So there is less to worry about there.

For business though, the story is different. Though Apple claims that 98% of Fortune 500 companies are Apple users, proper “enterprise” style usage hasn’t been possible until today’s announcement. This means that business users are sent straight into the arms of the likes of business kings Microsoft and the ailing Blackberry, which has traditionally been a Business company.

Perhaps more worryingly for Apple – and what sparked the move – is that enterprise is growing on Android. Whilst coincidentally it was announced this week that Samsung was giving up on Knox, its enterprise system, Google has made it known that it too is working on enterprise. The forthcoming “Android L” looks set to have similar enterprise capabilities to Knox and what Apple has announced today – including the ability to run enterprise and personal apps on the same device, including duplicate copies of the same app. This means that you could run (say) your Gmail and your corporate-deployed Gmail app on the same device, on two separated copies of the Gmail app.

Apple clearly doesn’t want to let Google steal a march in such a potentially lucrative area.

So what does this mean for the iPhone 6?

We’re all thinking it. Yeah, enterprise is boring – but what about my new phone? Is it going to be full of business nonsense? Will it be delayed so they can code all of this? The good news is that it probably won’t affect anything: if you buy an iPhone as a consumer, it’ll still look and function like an iPhone should. And we’re expecting the iPhone 6 around September 19th, since you’re asking.