Twitter has slammed on the handbrake and made a swift U-turn – restoring some tweets that it had previously blocked in Pakistan following claims that they were “blasphemous”. 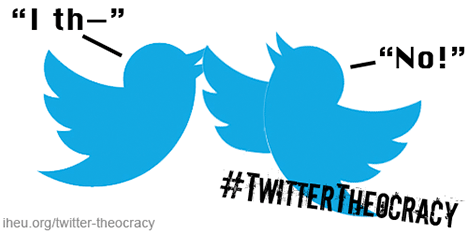 Since we reported on the story a week ago, the #TwitterTheocracy hashtag criticising the decision took off, adding to the pressure on the company.

According to Chilling Effects, a website that monitors internet take-down requests, Twitter released the following statement when unblocking the tweets:

“We always strive to make the best, most informed decisions we can when we’re compelled to reactively withhold identified content in specific jurisdictions around the world. On May 18, 2014, we made an initial decision to withhold content in Pakistan based on information provided to us by the Pakistan Telecommunication Authority. Consistent with our longstanding policies we provided notice to all of the affected account holders and published the actioned takedown requests on Chilling Effects to maximize transparency regarding our decision. We have reexamined the requests and, in the absence of additional clarifying information from Pakistani authorities, have determined that restoration of the previously withheld content is warranted. The content is now available again in Pakistan.”

So that’s good news – but the original tweets were sent in May, so given the ephemeral nature of Twitter, they probably aren’t particularly relevant now. Here’s hoping that next time Twitter receives a takedown request from the Pakistani government that it examines it a little more critically before jumping to a decision to block.