An interesting new report from Metacritic suggests that 2013 might not have been the best year for gamers. The website, which aggregates review scores from dozens of different websites has done the maths… and determined things were a little underwhelming. Read on to find out more.

In 2013, the Xbox 360 only had three titles score above 90% – the multi-platform games GTA5, Bioshock Infinite and Rayman Legends. The PS3 only had one more title scoring above 90% – which was of course The Last Of Us. Overall only seven unique titles (ie: with mutli-platform releases amalgamated) scored over 90% – the same as 2012, but as Metacritic notes, still far fewer than the years before it. Here’s the full list of the top Metacritic games: 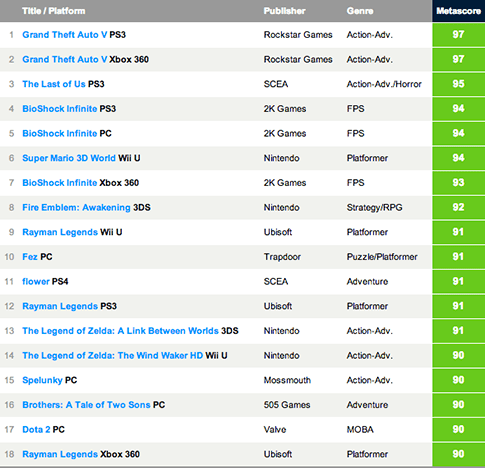 How can this be explained? The situation hopefully isn’t as dire as it seems, but could just be a symptom of 2013’s transition to a newer generation on consoles. As the big shot developers, like Activision, Ubisoft and EA started making stuff for the new consoles, it meant there was 1/3 fewer games released on the Xbox 360 in 2013 compared to 2012. With focus elsewhere, what remains is likely to be sequels (which pack less of the “wow!” factor), and the sort of shovelware that is only ever bought by ill-informed relatives as gifts (think pretty much every game that is a film tie-in).

So what of the new contenders? No Xbox One titles hit the magic 90% mark, and only one PS4 title did (Flower). This isn’t surprising either – not only did both new consoles have less than two months to make a mark, but as with all console releases the games are always not going to be taking full advantage of the hardware, and developers will not be well practiced in making polished games for the new platform. Similarly, games risk being rushed to reach the all important launch window (think how Sony trumpeted Knack during the big E3 unveil of the PS4, only for it to turn out to be crap on launch).

Outside of the main consoles the WiiU has had three titles hit the 90 mark too – Super Mario 3D World, Wind Waker HD and Rayman Legends. Given the console should be in it’s prime at this point – three titles is great… but could it to do any better? As ever, the problem for Nintendo is the crippling lack of third party support.

So should gamers worry? Has it been a terrible year for gaming? Let’s hope it has just been a structural adjustment in the industry and that 2014 will turn out even better. It’s certainly looking very promising.