The Daily Mail is in typical outrage-mode today as it breathlessly reports on how people are now going to be able to apply for welfare using their Nintendo Wii. 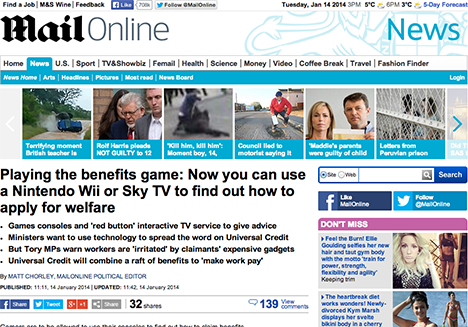 Apparently an organisation called Looking Local have been contracted to provide details on how benefit claimants can sort out the payments they’re due, no doubt having been messed around by the completely disastrous roll out of the government’s Universal Credit system. They’ve built a website that works on both the Wii and internet connected Sky Boxes to give users essential information on various council and government services.

Obviously the report is fleshed out with a suitably stupid quote from a Tory MP attacking the ‘scroungers’. In this case, Philip Davies farted out some rather cliched words:

‘I have been struck by the number of people on them who manage to combine complaining about welfare reform with being able to afford to buy copious amounts of cigarettes, have lots of tattoos, and watch Sky TV on the obligatory widescreen television.’

Let’s back up a bit – what’s wrong here? Let’s put what many people view as a relentless ideological assault on the poor to one side – after all, not only are we a tech website, but an assault on the poor is something that Mr Davies and the Mail are likely to agree with.

What of the Sky TV? I can’t help but wonder if Davies is in fact referring to “multichannel TV” generally, in his head picturing the four old terrestrial channels. As you’ll no doubt be aware, we switched off the analogue transmitters in 2012, so all viewing is multichannel. As to whether people on benefits are really paying for a Sky subscription… They could be, but it’d be nice to see some evidence for this oft-repeated claim.

(And besides, if you wanted, you could make the argument that given there’s not enough jobs for people who want them, and the government are hell bent on cutting services like youth centres, what else are people going to do? But I digress).

Anyway – what of the meat of the outrage? The fact that Looking Local are telling people how to get benefits. Leaving aside that people are entitled to them so really local authorities should be obliged to tell people about them – what Looking Local have done is simply build a website optimised for TVs. It’s like how if you go to a website on your phone, it will look different to how it does on a desktop computer – this is the same, but aimed at TVs.

I know, try to calm that rage! It’s actually reminiscent of an old teletext service and is a really good idea for reaching traditionally disenfranchised audiences. Whilst readers of this website are no doubt tooled up with the latest smartphones and tablets, it is easy to forget we’re not all this lucky.

What about the older generation? Or the poor? They may not have an iPad to find out when the next bus is coming, but they might have an old Wii or a Sky box – so letting them find information there makes a lot of sense.

Here’s the London bus countdown on there – which you would otherwise need a smartphone or a computer to access: 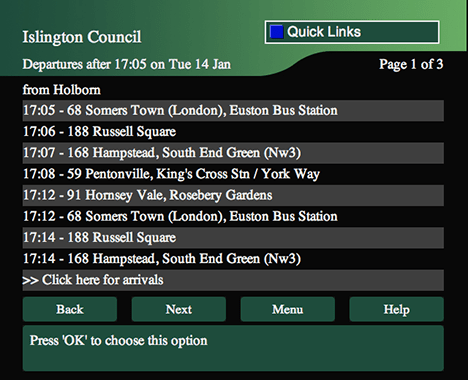 I know what you’re thinking – a Wii?! They’re £130 on Amazon, or can be picked up second hand for as little as £40. These feckless scroungers are spending like they’re Donald Trump. Whatever will they want next? Three meals a day?!

Presumably, Philip Davies finds the idea of unemployed people having any enjoyment or leisure time in their lives abhorrent – how dare they not be subjected to around the clock despair at their circumstances?

Looking Local is a long way from an app on the Wii homescreen that says “FREE BENEFITS MONEY –> CLICK HERE TO SCROUNGE”. It is a website.

And here’s the thing. Yes, the service does enable users to find out about benefits without them having to own a fully blown computer – but it’s interesting how neither the Mail or Davies thought it relevant to mention that the service also enables users to search for jobs: 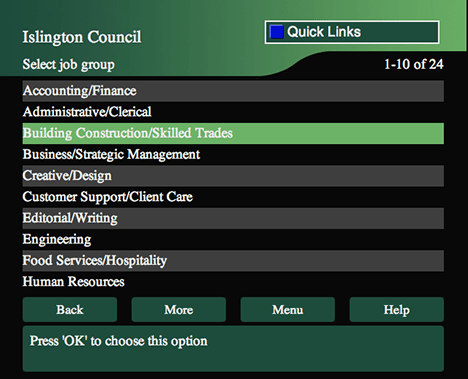 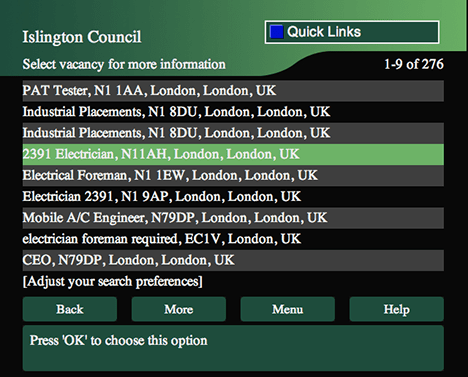 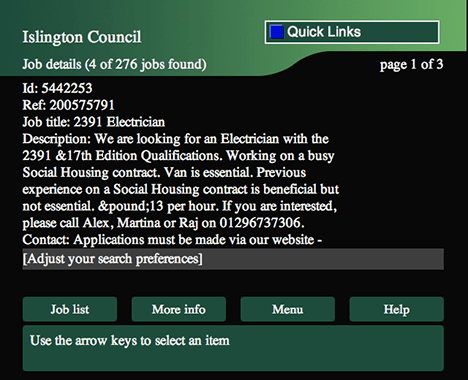 The Mail say that “at a time when the government is trying to curb benefits spending, including a cap on how much families can receive, the idea of making it easier to apply for handouts is likely to prove controversial” but all this “controversy” is made of is manufactured outrage, to reinforce stereotypes about the poor by highlighting a genuinely useful service. All whilst the Minister responsible for Work, Iain Duncan Smith, inexplicably remains in his job despite two genuine IT disasters on his watch.