Launched today at 9am, a new app called Wordeo has launched, which blends the short video clips of Vine with the visualised messages of Snapchat to create a new messaging experience. What’s perhaps more interesting is that the bods behind it are none other than former Apple and BBC iPlayer tech types… so it might be worth paying attention! 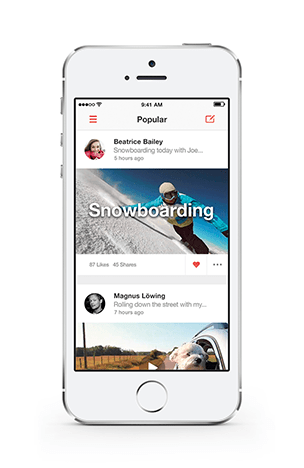 A Wordeo is a message which has been transformed using the app into a video. Take the below as a good example:

You start by entering a message – say, something cheery like “one death is a tragedy, one million is a statistic” and the app will go through word-by-word and find a matching video for each one. They’ve partnered with Getty images, who specialise in stock footage – so you’ll get a clip of “one” then “death” then “is”, “a”, “statistic”, and so on – then the final video is made by laying each word on to a split second clip of the stock footage, creating a nice montage.

It’s possible too to tweak each Wordeo before you publish – you can swap out the stock footage for your own clips from your phone too, either picking from your library or shooting something there and then. You can also tweak the music – with around 50 different backing tracks to choose from.

So will it take off? It’s an interesting proposition, and is another interesting alternative to the likes of Vine and Instagram. It is conceivable that in a world where Tumblr GIFs are the culture that short video could make an impact. In fact – the ability to export to GIF could be what makes the app.

Wordeo launches today and is initially only available for iPhone.