Disappointing news for British and European gamers today as a leaked roadmap from Sony showing the plans for their Playstation Now services has Europe drawing the short straw – with launch delayed until the first quarter of next year. 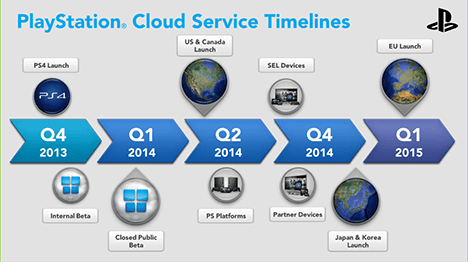 As we reported last week, Playstation Now is Sony’s cloud-based service that will bring Playstation 3 and older games to the PS4, which doesn’t have backwards compatibility – as well as the PS3 (as another option for accessing certain games) and even Sony Bravia TVs and PS Vita.

The way it works is through the cloud – all of the game processing will be done in a server farm somewhere – with the box under your TV, or the chip inside your TV simply relaying your controller input and displaying a video stream of the result.

To make it work Sony are said to be building thousands of ‘custom’ PS3s to do the processing for each cloud gamer.

Sadly though – according to this leaked roadmap, it appears us Brits are the losers – with launch of the service here potentially arriving a year after the US and Canadian launch.

Still, I guess it’s only fair – Japan hasn’t even got the PS4 yet, with it due to hit shelves there on February 22nd.

The delay is likely to be down to a couple of reasons: the first of which is broadband speeds as cloud gaming requires a very fast internet connection. Whilst we may have okay broadband in much of the UK, this isn’t necessarily the case in the rest of Europe. And even though we might think our 50Mb broadband is pretty good… that’s nothing compared to South Korea and Japan, where the service is due to launch by the end of this year.

The other difficulty is that unlike America, or the handful of countries in South East Asia which form the other big market is that Europe is lots of different countries – which whilst united by the EU single market, all still have separate broadband companies, ISPs and all of the other companies that you need to talk to before launching a big online service.

So Playstation Now will be here not Now, but next year some time. In the meantime, if you’re dying to play The Last Of Us or God of War… you could just buy a PS3.