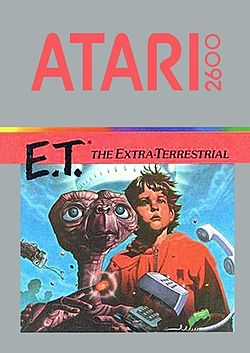 Presumably stung by the blatant Playstation product-placement in Netflix’s acclaimed House of Cards remake, Microsoft are jumping on the original programming bandwagon and have announced a documentary series – with the first episode attempting to dig up the remaining copies of ET: The Videogame.

Xbox Entertainment Studios have teamed up with double Oscar winning filmmaker Simon Chinn and his cousin Jonathan Chinn to make the series – the former having previously made the highly acclaimed Searching for Sugarman and Man on Wire and the latter having produced documentaries for PBS and FX.

Cleverly, they’ve decided to make the first documentary in the series delve into a legendary piece of gaming lore: The story of the 1982 Atari 2600 game ET: The Extra-Terrestrial. This first episode will be directed by Zak Penn, who previously worked on X-Men 2 and Avengers.

An early entry into the canon of terrible games cashing in on films, the ET title is said to be one of the worst games ever made. Yes, it looks terrible, but even for it’s time it looked bad: Critics derided it for not looking as good as contemporaries like Donkey Kong and Frogger.

It was also a financial disaster for Atari – with thousands of unsold cartridges. So Atari did the most logical thing possible and buried them all in a massive hole in the ground, in New Mexico. Escalating, the new documentary has apparently bought the rights to excavate the pit where it’s thought they’re buried. It’s going to be the Richard III “King in the Car Park” for our generation.

Don’t believe me on how terrible it is? Watch and listen to this guy on YouTube try to play the game… and imagine parting with £40 to play it.

The documentary is set to debut on both Xbox One and Xbox 360 next year, and will be available for viewing via Xbox Live.