The PR company One Poll are fairly notorious for putting out terrible surveys. Essentially, if you see some statistics or the result of a poll in the news then the chances are the numbers have been, umm, compiled, by a PR firm in order to get their client’s name in the press. Today’s example comes from Virgin Media – who have managed to find a hook to plug their broadband services in a Christmas context. 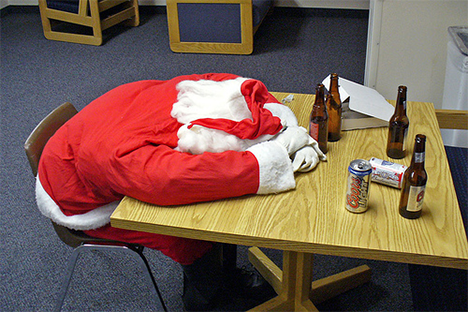 “1 in 5 Christmas hosts are a Webeneezer Scrooge”, says the press release. See what they did there? Apparently they surveyed 2000 adults on something fairly obtuse:

“With over 88% of Brits planning to use the internet over Christmas, Wi-Fi etiquette is set to cause tension in homes across the country where a scrooge-like 17% think it’s rude if guests ask for access your Wi-Fi. The same percentage say hosts should expect guests to go online and use bandwidth at will.”

“The biggest Wi-Fi scrooges are found in Yorkshire where 25% think it is rude for guests to ask to use their Wi-Fi, whereas those in the East Midlands are most likely to welcome guests onto their Wi-Fi with just 12% thinking the same.”

Questions of statistical significance and whether they appropriately weighted the poll demographics aside, this wasn’t the only weird question they asked survey participants.

“The top reasons for Christmas web use include checking the sales (47%), scrutinising the weather forecast for snow (44%), keeping in touch on social channels (32%), hogging the bandwidth by streaming and downloading videos (17%) and downloading and playing new games (15%). “

Don’t worry – normal people don’t usually silo their internet usage like this… this is just the result of bored survey participants clicking on a limited selection of boxes online.

“An independent study commissioned by Virgin Media today reveals that 21% of us consider using Wi-Fi and accessing social networks as critical to a successful Christmas Day.”

Incidentally, a 1980 poll that I just made up, but that could possibly be almost as statistically rigorous, suggested that 21% of people considered access to telephones through which they could communicate with people was critical to a successful Christmas Day.

It’s almost as though Christmas Day is a day in which functioning adults in the 21st century continue to engage with technology rather than sit in the dark waiting for Boxing Day.

So there you have it: People like to use the internet at Christmas. Shock, horror.