British Gas has come up with a new system to control your home’s heating and hot water. Called Hive Active Heating, it’s designed to give you control of your home via PC, web tablet and mobile phone. But is it an improvement on the previous heating only solution from British Gas? Read on to find out…

Back in April we reviewed the first British Gas remote control heating system. Our verdict was that it wasn’t bad at all. However, it was a little bit expensive, needed to be able to control your hot water and should also integrate with your account so you can see exactly how much you are spending on gas.

Fortunately it seems that British Gas have listened to some (if not all) of our points with their latest remote system, Hive. In addition to being able to control your heating, Hive also controls your hot water too – so you can make sure that if you fancy a hot shower you can turn the water on for a couple of hours beforehand even if you are still, say, at work or on the bus.

Whereas the previous remote heating control system cost £199 for British Gas customers and £299 for non-British Gas customers, Hive costs £199 regardless of your service provider. This includes a wireless thermostat, a receiver that connects to the boiler and a hub that connects to your broadband modem/router. It also includes the cost of the engineer to come to your house to install the system (British Gas claims this is worth £80). Alternatively you can buy it without installation for £159 though I wouldn’t recommend this route unless you are particularly proficient with how central heating systems work.

Providing you have a minimum download speed of 256Kbs then you shouldn’t have any problems with getting the system fitted. British Gas claims Hive will work with 99 per cent of boilers, though you can only use it to control a single heating zone. In other words, it won’t work properly with multi-zone heating systems.

Thankfully my property is relatively straightforward. I connected the white Hive hub to the spare Ethernet port on my BT Infinity Home Hub 5 router while the engineer fitted a new wireless thermostat for the hallway and a simple receiver which controls the boiler in the nearby utility room. The whole process took around an hour including setting up the online account (https://www.hivehome.com/) and logging into the system via the Apple app on my iPhone (Android smart phones are also supported).

Tablet design without the touch 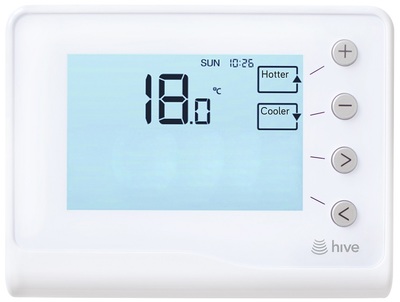 Whereas the previous thermostat was quite rectangular and chunky (more like a conventional wired thermostat), this latest wireless thermostat is squarer and flatter – much more like a web tablet.

However the key difference is that it’s not touch panel. Instead you have to use the four buttons on the right hand side, including the + and – buttons to turn the temperature either up or down and a left and right arrow key to bring up the hot water controls.

The default display shows the current temperature (to the nearest tenth of a degree Centigrade) whereas the sub menu displays icons for the boiler, the heating (a kind of radiator symbol) and the hot water tank.

To be honest, it’s all a little bit confusing. With the previous wireless thermostat a flame icon let you know instantly if the heating was on, whereas with this you have to press a button on the screen and look for the arrows joining the boiler to the radiator symbol. However, one of the main advantages of this thermostat is that you can take easily lift it out of the cradle and use it anywhere in the house. 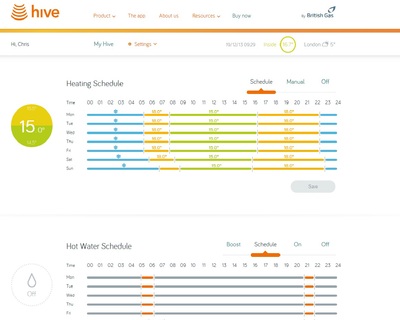 While the digital display is inevitably limited in its capabilities to keep things relatively simple, thankfully control via the web or app is much more advanced. Simply go to the Hive website (www.hivehome.com) and enter your user name and password. Using the bar graph it’s possible to slide the temperature for different parts of each day so, for example, 20 degrees Centigrade from 4pm to 11pm, dropping to 15 degrees over night until 6am.

Similarly you can control when during each day you want the hot water to come on, though not the temperature of the water! There’s even a boost option which will switch the hot water on for just one hour – handy if you just want a warm bath or shower when you come home but don’t want to leave the hot water on all night. 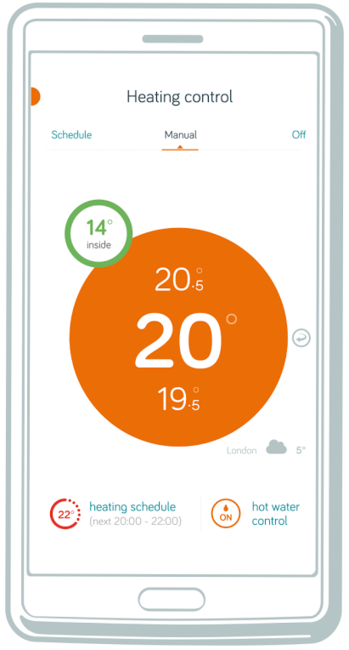 While it’s best to use your PC when setting up heating and hot water control, for day-to-day use it’s probably best to download the app to your smart phone (Apple and Android). You can set up heating/hot water schedules via your phone too, it’s just a bit more fiddly that’s all. British Gas has changed the interface from its previous My Home app with improved design (nice little round circles showing the temperatures).

However, the user interface is a little less intuitive than before. The main thing to understand is that the large circle within Heating Control shows the temperature the heating has been set to reach and the smaller circle shows the current temperature.

To increase the temperature you want in the house you simply toggle the circle up and down. This changes the colour of the circle too – blues for very cold, greens for quite cold, orange for normal room temperature (around 20 degrees) and reds if you like your home tropical – up to 32 degrees centigrade!

Now that really is lovely and toasty. Just a shame that very few of us can afford the heating bill to get the house to anywhere near that temperature!

Whereas the previous remote control system from British Gas only controlled the home’s heating, this one is much better in that it can be used to control the hot water too. It’s also slightly cheaper. Another advantage of the Hive system is that it also comes with a much better wireless thermostat which can be lifted out of its cradle for use in other rooms. However, the system is not without its faults. It would have been nice if the wireless thermostat was touch screen (this is maybe something for the next generation model). Also control isn’t quite as intuitive as it should be, either via the wireless thermostat (where you need to use the four side buttons) or via your smart phone app (the colour temperature icons are a bit confusing at first). Finally, it would have been good to integrate the control system into your gas account fully so you can see exactly how much gas you are using and how much it is costing. Given how much bills have risen in the last few years, I think that would be the biggest benefit of any remote control heating system.