There have been two interesting bits of news out of Osterley over the last couple of days, as Sky have further boosted their on-demand facilities. 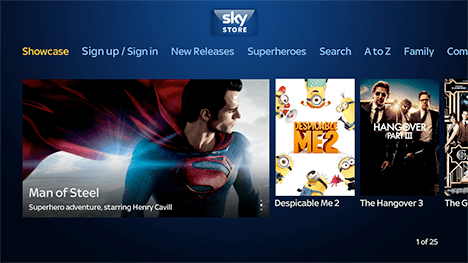 Sky Store is not a part of your Sky movie subscription package, or even a part of Now TV (Sky’s Netflix-alike), but will sell on-demand film streaming separately. It may seem like an unusual move to launch a third movie brand, but it makes sense when you look at the catalogue: Whereas the existing selection of movies are limited to films Sky have licensed from the major film companies on an exclusive basis, it appears (at least to this outside observer) that Sky Store is more analogous to recently released DVD, which Sky are selling on-demand on a non-exclusive basis.

This means that Sky Store will be getting movies around a year before they appear on Sky Movies/Now TV – and explains why they have to be sold separately. And unsurprisingly, the Sky Store catalogue appears very similar to the catalogues held by the likes of Xbox Movies – we’re talking recent DVD released blockbusters like Man of Steel, The Wolverine and the Alan Partridge movie.

Pricing looks pretty good too – with films rented for between 99p and £3.49 – with users having 48 hours to watch the film. As you might expect – it’ll work on Sky+HD boxes, NowTV boxes – along with Roku, YouView, the Sky Store website and Sky Store app. It’s particularly good news for Sky+HD customers as even though this isn’t part of a package, it’s yet more films available through the same box.

This also coincides with the separate news of a technical upgrade to Sky+HD. After upgrading, users of the Sky+HD app will be able to set on-demand programmes downloading on their box, wherever they are. This means that if you’re on the bus heading home, you can tell your box to start downloading Doctor Who – so it’ll be ready to watch as soon as you get home. Top stuff.