Whilst gamers everywhere are engulfed in the emerging war between Xbox One and PS4 and are increasingly feeling pressganged into picking a side, there is a group of them who have risen about the petty cycle warfare, and look on with disdain. Who are these people? Buddhist Monks? The Swiss? Adults? No – PC gamers.

Thanks in large part to the success of Valve’s Steam platform, PC gaming has quietly entered the ascendancy – with PC players having had PS4/Xbox One level graphics for years. Are they a bit arrogant? No doubt – but they’d probably boast how they can render their face with more realistic smugness than console competitors.

So it’s only natural to want to join them – but where to start? Gaming laptops have become an increasingly big deal over the years – with Alienware being one of the major manufacturers. However, Razer are challenging that hegemony with the Razer Blade Gaming Laptop. The company are perhaps better known for their peripheral devices but now they’ve gone and cut out the middleman and made the computer in the middle… how does it do? 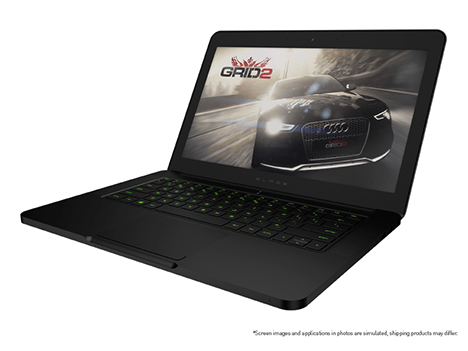 The first thing you’ll notice about the Blade is just how thin it is. The conventional logic is that gaming laptops are bulky monstrosities packed with high-powered components, and the sleek laptops are slightly underpowered and geared towards more general tasks, like web browsing. You don’t need complex shadow rendering on solitaire after all. But the Blade seems to subvert this – it’s only 9.33mm thick.

The second thing you’ll notice is that it’s very pretty. The casing is jet black, and the keyboard and touchpad are very reminiscent of a Macbook Pro in terms of layout – keys are nicely spaced, and the touchpad is nice and large (and supports multitouch). The keys glow a nice green colour – so you can pretend that you’re in the Matrix. Either side of the keyboard are a couple of speakers, giving nice definition to the stereo sound – and the good news is that the machine supports Dolby Home Theatre v4 if you want to plug in anything more impressive – with support for 7.1 surround sound if you want to plug in via HDMI to a TV.

Inside is a non-too-shabby Intel Core i7-4702HQ Quad Core processor with hyper threading – which runs at 2.2ghz (or 3.2ghz if you give it a turbo boost). There’s 8GB of RAM on board, and a Nvidia Geforce GTX 765M – with 2GB of GDDR5VRAM – which I believe translates to “pretty good” in human language.

Though be warned:: once the processors get wiring when you’re playing a game, the laptop can get a little warm – so you might want to be careful if playing on your lap, or in a barn filled with sawdust in Arizona.

Unfortunately, the hard disk options are a little shabby – especially for a laptop that will likely retail north of £1500: The Blade comes with a 128GB, 256GB or 512GB SATA III SSD. To write this review I’ve been trying out the 128GB model and was slightly bewildered to find that the Windows installation took up around half the space – not leaving much room for anything else when modern game are gigantic (Call of Duty Ghosts is around 30GB!). So I’d strongly recommend going for a bigger drive.

Oh, and there’s no optical drive – so no DVDs or Blu-Rays here… but let’s be honest… who’s going to notice? I didn’t realise until it came to writing this review and I was checking the spec.

So that’s the hardware – but it’s what you do with it that counts, right? 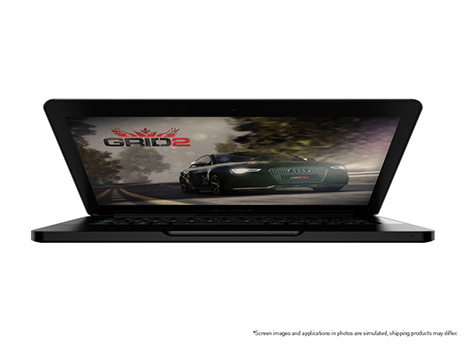 Obviously this laptop is going to run Windows 8.1 – given that Windows is, er, the only game in town when it comes to gaming. Whilst this may sound like a harrowing experience to anyone who’s ever had to actually use Windows 8, it’s not the end of the world. What’s nice is that there’s absolutely minimal manufacturer bloatware – there’s no special Razer Blade software, no McAfee trial versions popping up and no constant Java updates.

So how did it perform? After installing Steam and downloading Call of Duty: Ghosts, it seemed to perform rather well indeed. I hasten to add I’m by no means an expert on the details of processor speeds, framerates and the like – but to my lay person’s eyes it certainly played great. There was no slowdown, graphics were crisp and the auto-optimised CoD looked a lot better than it did when I reviewed the Xbox version. There was no pop-up or dodgy draw distances – and the detailed appeared greater than the Xbox version. Cranking up the video settings manually didn’t seem to impact performance either, which was great.

One thing that I did struggle with – and I realise this might be a rather specific problem, and not Razer but Microsoft’s fault is controller support. CoD, of course, used the “WASD”+mouse control scheme common to pretty much every PC game ever. Making this work with a touchpad is far from ideal – so you’ll want to plug in a mouse (I bet Razer sell some nice gaming mice), or a control pad.

I tried plugging in my Xbox controller and wireless receiver dongle, and inexplicably Windows 8 refused to recognise it despite it being an official Microsoft accessory. After download the software and drivers for it manually – which was designed for Windows 7 (they haven’t bothered to update it), and manually installing the driver, my controller was finally picked up – at which point the game automatically detected an Xbox controller was plugged in, and it worked great. Still, a bizarre problem for two Microsoft devices talking to each other to have. 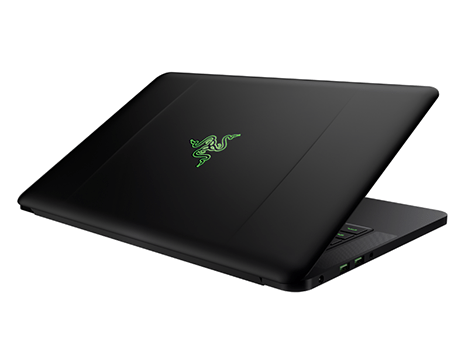 So is it worth it? As laptops go – this is pretty high powered stuff. If you’re not a gamer, at risk of sounding like a zealot, save your cash and get a Macbook Pro instead (you’ll thank me when you don’t have to use Windows 8) – but if you live to game, then this laptop could be a pretty good choice.

Whilst obviously not as highly powered as a desktop rig, it’s perfect for carrying around and gaming on the go. Just try not to shout swear too loudly when you get killed if you’re travelling in the quiet carriage.

It’d be nice if the screen were a little larger, though in the testing I did, it still rendered everything beautifully – with no slowdown. So if you’ve got a bit of extra cash and can’t decide between PS4 and Xbox One why not give the Razer a go and be at the… CUTTING EDGE? (I’m so, so sorry.)