For a company known for making cutting edge hardware and software, with a huge focus on design and user experience, Apple have still made one or two weird decisions. 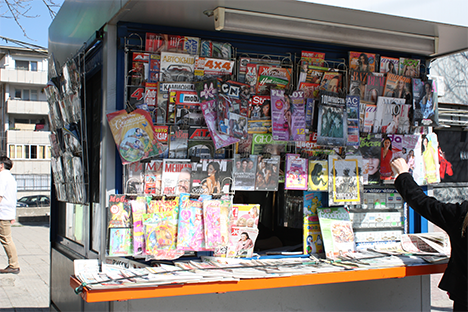 “Hey, how about we force all of one specific type of app to hide inside a folder, whether they want to or not?”

“Great idea – why don’t we do this to apps from an industry that is already experiencing huge financial problems, so we can prevent them from getting any more exposure?”

That’s right – I’m talking about Newsstand, the iPhone and iPad app designed to hold all of your magazine and newspaper apps. Inexplicably, Apple forces these to sit inside Newsstand – despite the only thing differentiating them from other apps being that their legacy product used to be printed on physical paper. It’s almost as inexplicable as making all of your social networking apps sit inside a “Filofax” folder, because you used to have to carry a physical contact book around in the olden days.

And why is this a big deal? Think about your homescreen – you’ve got all of these colourful icons fighting for your attention – are you going to check your Facebook… maybe play some Fruit Ninja… are you really going to spot that drab Newsstand icon and remember that you can read a newspaper in there when you’ve got the BBC News app and a host of less relevant apps competing for your attention whilst sat one less button press away?

On a technical level it makes no sense either – Newsstand isn’t a container for magazines in the same way that you need to read books in the Kindle App (or MS Word documents in MS Word, say) – all Newsstand does is launch a standalone app built by the newspaper or magazine. These apps vary in quality from just essentially PDF readers to fully blown wizz-bang app experiences. There’s surely very little difference between, say, The Times app and Flipboard – other than that The Times is also printed on paper occasionally.

“But James, I don’t see what the big deal is – people will still know where the newspapers are if they want to find them, right?”.

The further problem comes when you look at the wider context for the news industry: times are tough, thanks in large part to technology like the iPhone. In the old days, making profitable news was relatively easy: print the news on to some paper, and sell it to people – and supplement the sale price by also selling advertising inside. Unfortunately for the papers technology came along: no one pays to read the news online.

Technology has also hurt advertising: why would you advertise in the newspaper, when you can run better targeted adverts online, and get better data on who is looking at the adverts and who is clicking? And similarly – classified ads, which used to be a mainstay of (especially local) newspapers are now a thing of the past, as everyone sells their wares using eBay, Amazon and even Facebook.

When apps turned up, it was the first potentially good news in a long time for journalism: unlike the web, there’s a built in mechanism for making small payments – so maybe, just maybe it might pay to write the news again. And whilst there may still be that hope, Apple certainly aren’t helping by ghettoising the news. Come on Apple – give the news it’s status back!