HP have today announced the UK availability of their “Live Photo” app and associated printing services – which uses an augmented reality app to turn photos into videos. 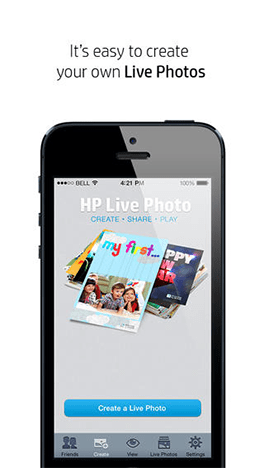 It’s been available in the US since the summer, and is an interesting idea. The way it works is by taking a frame from a short video and using this a bit like a QR code – which you scan with the app, which will then play the associated video. Check out the above advert featuring some bad-ass skateboarding kids (who are in no-way awkward actors) to demonstrate.

Rather nicely, it seems to augment the video playback on to the shape of the photo – rather than just playing it full screen.

So how does it all work? To create a “Live Photo”, the app takes a short video of up to 45 seconds and then lets you pick a frame from it to act as the photo – it then let’s you either print out the frame on a wireless printer, using photo-printing paper. You can also use one of HP’s pre-made templates for greetings cards and the like. It’ll then upload the video to HP’s servers and once you’ve got the print out it’s ready.

To view photos it’s a little more cumbersome – not only must you have the app on your phone, but you must add the friend’s username to your “view” tab – before scanning the picture. It’s a shame they couldn’t make it work like a straightforward QR code that loads a URL (how many of your friends are going to have the app installed?). But I guess this is difficult because matching a picture to a video is trickier than a QR code as there’s much more variability, and no error correction.

So it’s an interesting idea – do you think it will catch on? Let us know in the comments!