The death of Nelson Mandela has obviously had a huge impact around the world – but thanks to the internet it’s not just people the news deems worthy who can share their memories – but anyone. I’m not just talking about Facebook and Twitter here – but gaming communities too – even Minecraft.

Check out this video, posted to YouTube by a kid who wasn’t in school due to risk of flooding. Maybe I’m just getting soppy in my old age but it’s a surprisingly emotive watch: As he builds he starts to ponder to himself Mandela’s life, legacy and place in history – and you can hear him trying to come to terms with both the nature of death, and the absence from the world of such a famous and influential figure… all whilst building a medieval-style house.

I think it’s uplifting – say what you will about the kids of today but they’re not all knife-wielding little bastards, but it turns out that they can be creative and contemplative too.

The wider Minecraft community has also reacted in it’s own small way. Following news of the death one user posted this downloadable Mandela skin:

And another user produced this model of Mandela – complete with South African flag: 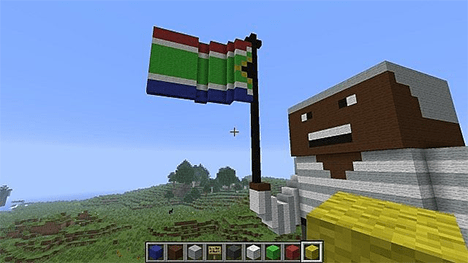 It might be tempting to belittle these tributes as silly or crass – but I think it’s fascinating to see the younger generation respond to news like this in the medium that they’ve made their own.