The phoney war has already started. With less than two weeks to go until the launch of the PS4 in Britain, Sony have taken over London’s Oxo Tower by extending it’s famous windows to recreate the Playstation controller symbols. 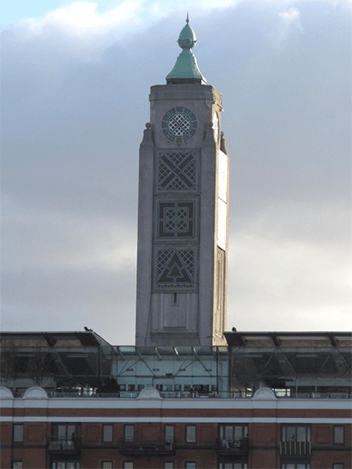 The tower is a prominent fixture on the south bank of the Thames. It was originally a power station – before being taken over by Oxo for somewhere they could use as cold storage in an era before fridges (if only we could link back to ye olde TechDigest’s 1930s coverage of these new fangled electrical contraptions). Now though, a bunch of shops, posh flats, and a posh restaurant. (If you’re wondering whether it’s worth going up the Oxo Tower, Mumsnet, of all places have some advice…)

Interestingly the building first gained it’s O and X windows after the London council at the time disallowed advertising by the river – so Oxo decided to instead happen to build some windows shaped like their name… very clever.

It’ll be interesting to see if Microsoft hit back by taking over any other London buildings. Maybe Kings Cross – or “Kings X” – could become “Kings Xbox”, or the London Eye could become a gigantic Red Ring of Death?