The Official Nintendo Magazine are reporting that a new stage has been announced for the forthcoming Smash Bros game on Wii U. Themed around arguably the best Mario game ever created, Mario Galaxy, the level is a little different to the others. 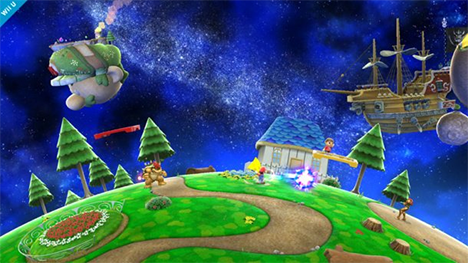 Apparently just like the game it is based on, not only is the level spherical, but gravity is very important too – with the pull emanating from the centre of the planet. This will presumably affect gravity across the rest of the level too, and as the game’s director Masahiro Sakurai explains, will require “new tactics”. Let’s hope this shakes things up a bit and other stages also have different physics – to vary the game a little from the same old formula.

The game itself is set to be released in 2014 and as before, brings together many characters from Nintendo games past to fight it out – though new characters this time round are a little lacking, as they’ve all been used in previous games. New additions this time round include “Villager” from Animal Crossing and… Wii Fit Trainer. Yeah. The one bright spot is the inclusion of Mega Man.

Personally, I’m hoping that the game will feature both Snorlax from Pokemon and a Goron from the Legend of Zelda series – so we can find out once and for all who is the best at napping.