As the launch of Sony’s new machine gets closer (we’re only a couple of weeks away!), lots of little tidbits of information are dripping out about what the console can do, and indeed – what it can’t. Here’s some of the recent headlines. 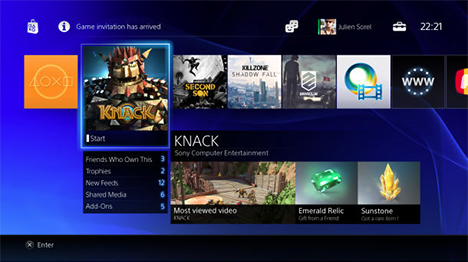 First up, let’s talk about the PS4’s camera. It hasn’t received as much attention as Microsoft’s Kinect 2 for a couple of reasons: first off, it isn’t bundled with the console when you buy it, and secondly… it basically isn’t going to be as good.

We’ve seen snazzy demos of the Kinect monitoring your heartrate just watching you, and responding to voice commands to essentially control the whole system – from switching on your Xbox to changing TV channel. Unfortunately for PS4 users, as Engadget reports, they’ll have no such luck – with the camera not able to start up anything, and none of the third party apps (Netflix, etc) responding to voice commands at launch. There is talk of some of this functionality coming later though, with system updates.

Apparently gesture commands on the PS4 aren’t really happening either – so no swiping your arms in the air to scroll through lists. The only clever visual thing at launch appears to be logging users into the system by recognising their face.

It’s not all bad news though, as Polygon reported on some innovative ways the PS4 hardware is being used in the forthcoming Dying Light (think Dead Island + Freerunning). Apparently in multiplayer, players may be able to use their headset to shout at the on-screen zombies to distract them from attacking their friends. And similarly, voice chat from friends could end up coming from the speaker in the controller – to create the sensation of radio communication, rather than through the headset.

So what will the PS4 actually look like when you switch it on? IGN took a look, and discovered how the console is influenced by social media.

Apparently there’s going to be a “What’s New” tab on your homescreen – acting a bit like a Facebook news feed. It’ll show status updates, in-game clips you’ve shared and all that good stuff. As you play there’s going to be a 15 minute video recording buffer – meaning that if you do something amazing and didn’t hit record, don’t worry – you can rewind a little and make sure you capture it to share with friends.

Messaging with friends has also been improved – with up to 8 people now able to join a voice chat party, and it works across platform too – so you can chat to that one person you know who actually owns a PS Vita, if you really want to.

Interestingly there’s clever new enhancement to trophies – that will score gold, silver and bronze trophies based on their relative scarcity amongst worldwide players – so if you do bother to collect every single bloody sea shanty on Assassin’s Creed 4, you’ll know just how elite amongst all PS4 players your skills are. 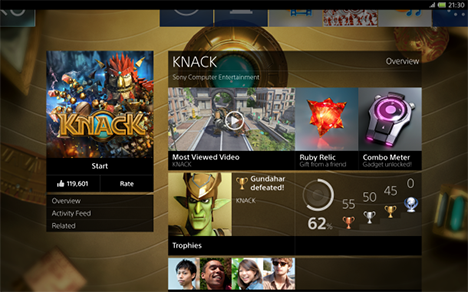 And of course – the interface all looks great, with each game (like you can see with Knack above) having custom artwork that integrates with the operating system (a bit like XBMC, if you’ve ever used that). And better still – you can even have the console display players’ real names rather than the obscure nickname they’ve come up with. Which means that – if you’re anything like me – you actually stand a chance of remembering who you’re friends with.

What else do we want to know?

Phew – so drip-by-drip we’re learning more! Now all we need is for someone to have some unexpected good luck, so we can find out more!

What are you curious about the PS4? Let us know in the comments!