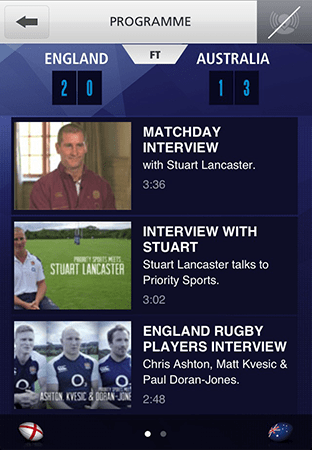 O2 have rolled out an update to the contents of their Matchday app ahead of Saturday’s England vs Argentina QBE Rugby International at Twickenham.

The updated app looks set to feature lots of video content, to take advantage of O2’s recently launched 4G services. This includes access to a live video stream of Stuart Lancaster’s post-match press conference, and up to ten replays of action on the pitch.

There’s also going to be free behind the scenes video featurettes showing what happened in the run-up to the match, as well as textual match reports and the ability to browse team line-ups.

Perhaps most intriguingly is the return of Reflink, which was used earlier this year for the 6Nations. Reflink gives the app user a live stream of the referee’s microphone – allowing them to listen in on exactly what the ref is saying, and why he’s making the decisions that way. If anything, it will enable the verbal abuse shouted at him to at least be more accurate.

What’s also cool is that the app has finally launched on non-iOS platforms – so Android and Blackberry 10 users can also get in on the action. Sounds like it’ll make a good companion to the game.

Personally I’m hoping that Reflink technology will be extended to other sports – so we can listen in to umpires in Tennis, coxswaines in rowing, or backbench MPs during Prime Minister’s Questions.