Commander Chris Hadfield, former resident of the International Space Station is currently on his book tour – and is all over the media talking about his life and work on the space station. Chances are you’ll recognise him – and how many astronauts can you say that for? 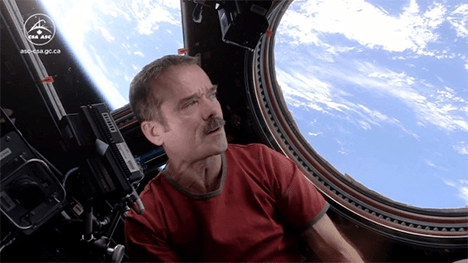 What Commander Hadfield did so well was demonstrate the power of social media for connecting people to his unique situation. Thanks to his regular tweets and stunning photos, no longer was the work of the ISS only of interest to scientists and enthusiasts, but normal people could connect with what he was doing.

I think this is fascinating for a couple of reasons – first it demonstrates the power of social media, and how disruptive a technology it is, and secondly it’s a great illustration of what scientists and other people in weird places should be doing.

To be honest, the power of social media doesn’t need spelling out – but Hadfield is perhaps the number one example of creating that personal connection. The immediacy, and the rawness make it really rather compelling.

It’s just like during the Olympics. One of the best things about the Games last year wasn’t just watching it all on TV, but following the athletes on Twitter – they were tweeting before and after their events, excitedly Instagramming and generally being very affable. It perhaps helped that – like Hadfield – they were all very relatable people. They weren’t the personality vacuums that are millionaire professional footballers – so when the kid from Watford won a medal in a sport you never knew existed, you really did feel delighted for them.

Hadfield – who if you read his Wikipedia pages you’ll see is one of the most sickeningly accomplished people you’ll ever read about – managed to cut straight through the super-qualified super-scientist stuff, and used Twitter to let his humanness shine through. And the wider public really responded to that.

So what can we learn from this? I think scientists should take note. Whilst not everyone is or wants to be a scientist, it’s important that “doing science” is seen as a good thing by the general public – after all, they’ll be voting for governments that control science funding. If the public stop caring about science, because it seems so abstract and so irrelevant to their lives, suddenly it becomes a lot easier to cut when times are hard.

So if there are any scientists reading… get tweeting! There must be loads of scientists all over the world in interesting places. Sure – the International Space Station may be hard to get to, but what about the people staying in the Antarctic all winter at the Amundsen-Scott Research Station? What about scientists on a boat in the middle of the ocean studying the currents? Or the people half way up a Volcano dodging the lava?

Unsurprisingly – the big challenge to this vision is internet availability. Aboard the ISS, Hadfield had internet access for a few hours every day – but it turns out that this isn’t so straightforward for some places back on earth.

The Space Station is floating above us – with constant satellite communication with the ground via a number of different ground stations around the world, which I guess makes sending an internet connection up there relatively straightforward, as data is being transferred anyway. And as for bandwidth bills – NASA and co have a comparatively gigantic budget to pay for bandwidth.

By comparison, a few months ago I hosted an event with Antarctic doctor Alex Salam – who whilst at the South Pole only had a 1 megabyte exchange of data a day at a fixed time… so would have to be very careful about who he chose to email. This is presumably due to a combination of needing to get a satellite signal, and needing to pay for the satellite internet bandwidth.

Some scientists though have had more luck. Helen Czerski, who as I write is on a boat in the mid-Atlantic studying bubbles has been tweeting throughout the whole journey (and even giving phone interviews from the ocean) – and has recently engaged followers in a game to name the buoy. It’s a great way for normal people to get involved with what she’s working on, and find out what it’s actually like for a scientist working in the field.

So c’mon other scientists – next time you go somewhere exciting, why not tweet along so we can discover dinosaurs/explore the ocean/research monkeys with you in real time?