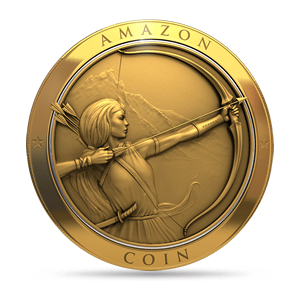 Not content with controlling a big chunk of Britain’s retail needs, Amazon have today announced they’re going a step further, and are launching their own currency. Well, sort of. Amazon Coins can be used to buy apps and content, and make in-app purchases on the Kindle Fire – and possibly make it cheaper than using cash.

When you’ve got the coins, they appear as another payment mechanism in the Amazon app store – and developers won’t have to change their apps to support them, as it will be built in to the existing payment dialogues. So if you’re addicted to wasting money on Candy Crush, this could be a marginally cheaper means of getting your fix.

Whilst the plan may seem pretty silly, it’s actually a rather savvy move on the part of Amazon. If you’ve ever received a high street gift voucher you’ll know how silly it is that it’s like proper money, but limited only to a specific shop (as a young boy, one Aunt always sent me Boots vouchers… what the hell would I do with those?). Amazon Coins are smarter as they incentivize this limitation by using the incremental discounts to make it seem worthwhile. This means that if you want the big discount and go for 10,000 coins, you’re locking up a guaranteed £90 into Amazon’s coffers, and not spending £100 elsewhere.

Now all we need to do is convince Amazon to pay their tax – and NOT let them pay it in Amazon coins.