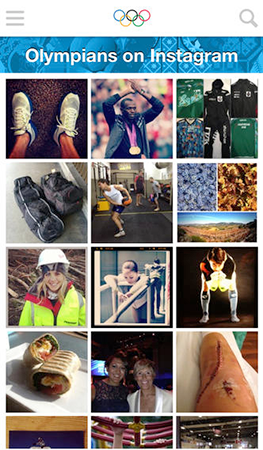 The International Olympic Committee have today launched a new app – aiming to connect up fans with athletes via social media.

Arguably this marks something of a U-turn by the IOC. Before last year’s London 2012 games there was a lot of noise made over the draconian social media rules – apparently banning people in the audience from recording videos, and with socially shared photos from Olympic Venues having copyright owned by the IOC.

The new app, which is available for both iPhone and Android provides essentially a database of athletes, searchable by nationality, sport, game or team. Go to an athlete’s profile and you can view their Tweets, Instagram photos and Facebook posts all aggregated right on the page – with built in buttons to follow them on your own Twitter account.

There’s already 5000 athletes listed – with many more expected to be added in the run up to the Sochi 2014 Winter Olympics.

Of course – the Olympics is all about competition and the app is no exception. They’ve tried to gamify the experience, offering you, the user, points for following and liking athletes – which can apparently earn you “virtual” medals.

One of things I found most compelling about London 2012 was that the athletes were tweeting. Many of the competitors were not superstars, but essentially just normal people, who happen to be pretty good at moving fast or throwing things or whatever. And by following them on Twitter, we all shared in their excitement – winning a medal for them was life changing. So I reckon this is a great move by the IOC.

Though they must be hoping that the athletes don’t post anything awkward… like criticism of the Russian government’s terrible attitude to gay rights.