Earlier today I had my first hands-on go with the forthcoming Archos GamePad 2 – Archos’ second attempt at turning Android into a gaming platform that can compete with the likes of the Nintendo 3DS and Sony PS Vita. 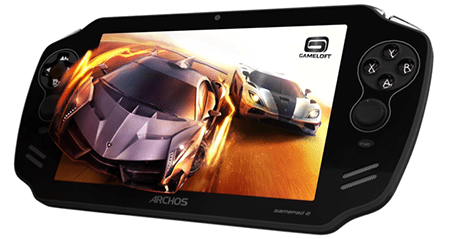 Traditional mobile gaming (if there can be such a thing – only a few years ago we were all playing Snake) has been on the more casual end of the spectrum, with simple games like Angry Birds and Fruit Ninja dominating. Serious gamers would have picked up a dedicated handheld to play something a bit more intensive on the go.

Recently though we’ve seen games developers take Android (and indeed, iOS) more seriously. Take a look at EA for example – they’ve recently published Fifa 14 for Android, and it’s pretty much the fully featured console game. There’s different tournaments, online play, even fantasy team building and an incredibly clever feature where injuries and bans on the real life pitch are reflected in the videogame too.

This is great news for gamers but there is one little problem. Whilst touch screens are great for managing emails and browsing the web, they’re frankly crap for gaming.

Most games like this rely on on-screen touch controls – so a pretend virtual thumbstick, and some on screen buttons – can you think of anything more horrible to use in an intense firefight?

What makes the GamePad 2 different from other Android tablets is that unlike, say, the Nexus 7, it actually has physical buttons. The screen is surrounded by Playstation-style controls. And this is where it does something really clever.

Whilst only a proportion of games have gamepad controls built in (there’s a common Android GamePad control), Archos have built a button mapping app – so you can map out where on the screen should map to the physical buttons around the edge, so even if the game doesn’t natively support real physical buttons, you can trick any game into thinking so. Apparently the new tablet already has 700 older titles pre-mapped too.

So I’m wondering – could we see a resurgence in buttons? We’ve got the convergence of ‘proper’ games coming to tablets and built-in support, and the GamePad 2 can serve as a proof-of-concept for the whole industry. If it proves popular, you can bet every other tablet manufacturer will come up with their own version.

The only stumbling block is likely to be aesthetic – after the sleekness of the iPhone and iPad, buttons make a device look ugly. But if buttons prove to be popular once more, could even Apple start to put them on their devices again?

We hope to be reviewing the Archos GamePad 2 in the next couple of weeks too – so stay tuned for that!