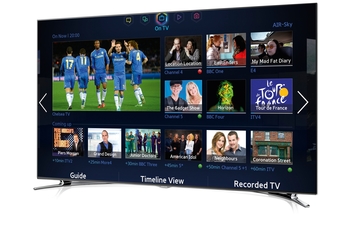 Samsung has become the first TV manufacturer to offer all of the UK’s terrestrial TV catch up services in one place with the full complement of players now available across its range of 2011, 2012 and 2013 range of Smart TVs.

In addition to the BBC iPlayer and the ITV Player all of the Smart TV models from 2011 now include 4oD and Five on Demand. With ten percent of UK television viewing now time-shifted, Samsung claims to be setting the agenda for the future of smart content and interaction on televisions.

Another feature on board the range of Smart TVs is Samsung’s S Recommendation which suggests what’s new to watch based on what you like. It intelligently learns your preferences, responds to your voice and instantly searches live TV, video on-demand services and apps to recommend content tailored to your tastes.

Says Guy Kinnell, Head of TV and AV at Samsung Electronics UK & Ireland: “According to our report ‘Samsung Futures: The Future of Smart TV’, people now spend an average of 2.7 hours a day watching TV1. We know that more and more people are using catch up services, so demand for our full catch up offering will be high.

“We’ve also seen content providers such as the BBC meeting this trend by commissioning original dramas for BBC iPlayer while the ‘House of Cards’ has been streamed exclusively for Netflix subscribers.

“Gone are the days of juggling multiple devices; viewers can enjoy their favourite programmes on the best screen in the house, whenever they want to.”