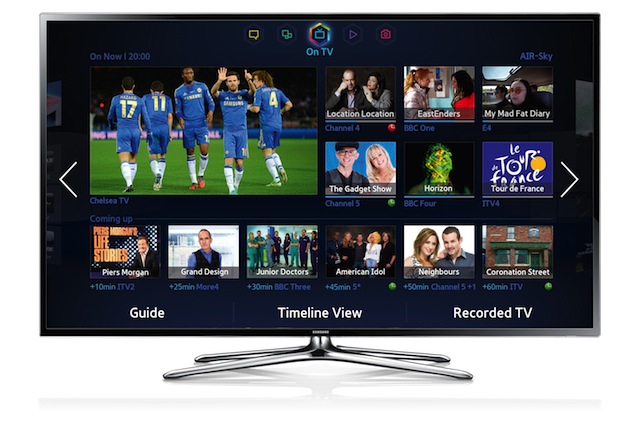 Price as reviewed: Around £600

We’ve seen the flagship 55-inch F8000 3D TV whopper from Samsung, and now we venture into more affordable territory with the 32-inch F6400. With many of the same connected Smart TV features of its big brother, can it impress in the same way? Read our full review to find out!

NOTE: We tested the 32-inch F6400 model. However, with the specifications between this model and the 40 and 46, 55 and 65-inch models almost identical, we’re confident that our tests with the 32-inch model will reflect a very similar experience were you looking to pick up one of the larger televisions instead. 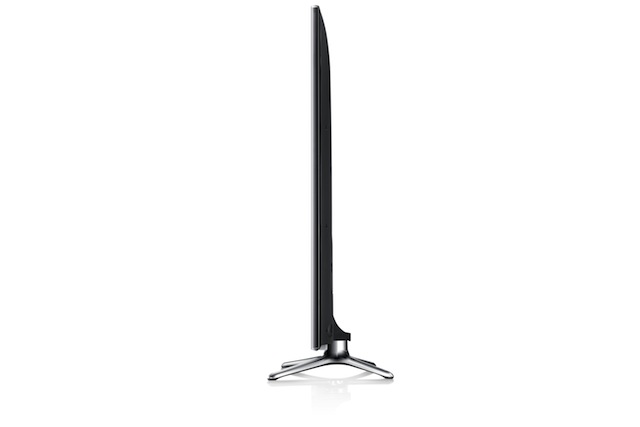 While not quite as dazzling as the flagship F8000 models with their slimline bezels and low-clearance stands, the F6400 Samsung TVs still look very attractive.

At 49.5mm thick, it’s a fairly plump set by today’s super-slim standards, but not so much to make wall mounting unsightly or impractical. With the stand attached, that depth jumps to 264.8mm, but again that’s not a depth that even a smaller TV cabinet couldn’t handle. A black glossy bezel of a uniform size just over a centimetre sits around the screen, with the edges finished with a clear perspex for a reserved, stylish finish.

For the F6400, Samsung have reverted back to their four-pronged chrome stand, what we at Tech Digest affectionately call the alien foot. It still looks great, and it’s more stable than the curved arc stand that ships with the flagship models even with it’s ability to swivel a little, though admittedly is a bit more “in your face” than the mostly hidden arc stand.

Though 3 HDMI ports, 3USB ports and the antenna are mounted on the right hand side of the rear of the screen, composite, LAN and a fourth HDMI port, along with power supple, go directly into the back of the screen, which may cause a few cable tidying headaches if using all ports when wall mounting.

It’s good to see 4 HDMI inputs on a smaller set at an affordable price, alongside an array of USB ports. Freeview HD only here though, which may rile those hoping to get a Freesat HD tuner too. 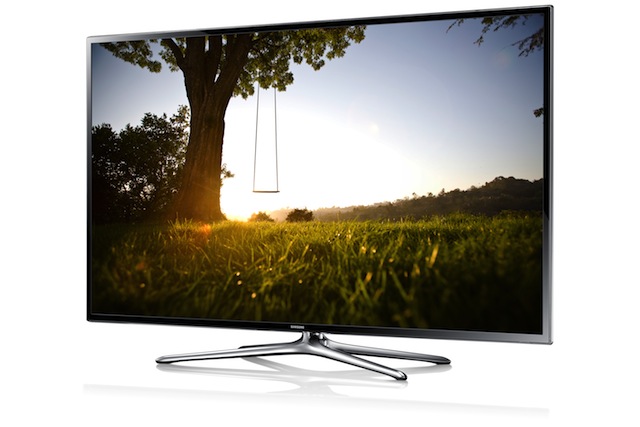 Out of the box the UE32F6400’s Movie picture mode doesn’t look half bad, and while it’s still not at an enthusiast’s level of picture perfection, ample image tweaking options (including white balance and green and red tint controls), will let you calibrate it just how you like it.

As with the F8000, Samsung’s improved the backlight consistency for the F6400, and it makes a marked difference to the overall picture quality. With deep blacks and rich, detailed and accurate (once tweaked) colours, there’s no problem with light leakage or image clouding with the latest models, with the blacklight and edge-lit algorithms working in tandem to really enhance the overall contrast of the image, and pull the most detail possible out of dark, shadowy scenes.

The screen’s sharpness sees images really pop in high-definition, and firing up a Blu-ray disc lets the screen really let rip, offering up great detail for what these days (in the age of giant LCD living room panels) could be considered a second room or bedroom set.

Motion clarity on the presets is a little too aggressive for our liking, and you’ll want to dial it back a bit with a custom setting unless you want to suffer from slightly watery movement. Once adjusted, fast action scenes move with little perceptible judder, and it’s a very pleasant set to view movies and sport on as a result

As you’d expect, HD content looks the best on the F6400, but with the screen size here not gigantic, SD content looks perfectly fine too. The upscaling capabilities aren’t quite as impressive as on the F8000, with some jagged edges appearing where they wouldn’t on equivalent HD content. But with a screen this size a decent distance away, it’s less noticeable anyway. Keep in mind that SD content on the larger F6400 models may suffer as a result.

The F6400 uses active shutter 3D technology, and it performs well for a TV this size. Of course, with a 3D visuals, you’re looking to bag as big a screen as possible to keep the 3D effect immersively encompassing your peripheral vision, but for a 3D gamer sat up close to the screen, the effect is still pretty good.

However, the forced motion processing which impressed so much on the F8000’s 3D visuals doesn’t work quite as well here, introducing significant motion interpolation that can hinder the depth effect. It’s possibly a processing side-effect of the low-powered F6400, using a dual-core system rather than the F8000 quad-core array. Even with the Motion Plus setting set to off, it was still present, and was only defeated by switching on the Game Mode, itself introducing a lot of judder. Which looks better is up for debate, and neither is perfect.

Two pairs of 3D glasses come with the set (the same design that’s a standard across all this year’s 3D models from Samsung), and they’re very light and comfortable, with the watch-battery that powers them sitting in a snap-down panel over the bridge of your nose. Ideally we’d prefer bigger lenses to help us from peeking out of the immersive 3D visuals, but the ones on offer here are large enough to sit relatively comfortably over a pair of prescription glasses.

The UE32F6400 suffers from the usual shoddy audio that the majority of flatscreen TVs seem afflicted with.

Though 3D sound options are available, the down-firing 10W stereo speakers sound hollow and tinny, lacking any real punch, though doing a good job of keeping voices to the fore.

As ever, our advice is to pair the screen up with a soundbar or home cinema surround unit, the sad price we have to pay since leaving the bulk of CRT screens behind us. 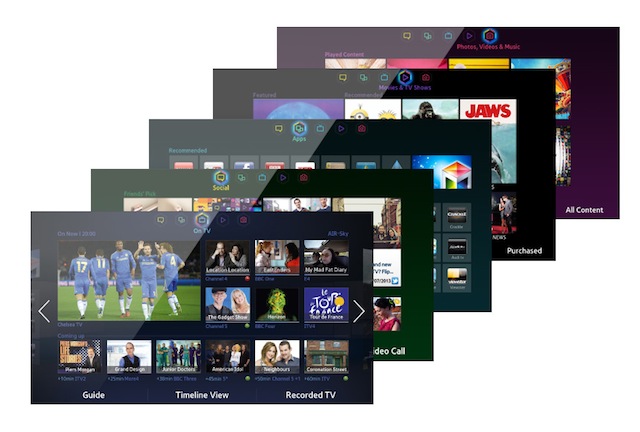 Packing in both Wi-Fi connectivity and an Ethernet connection, the F6400 has access to many of the Smart TV bells and whistles of its pricer counterparts. Though there’s no built-in webcam or mic, putting Skype video calling out of the question as well as the so-so motion controls, you can still use the microphone built into the second of the two supplied remotes to interact with the TV screen.

The F6400 shares the same radically overhauled Smart TV interface that we reviewed in the F8000, so aside from a few pertinent omissions, this next section is basically the same as when we reviewed the pricer set.

As well as connecting up with your household’s other smart devices (which we’ll talk about in the ” Remote Controls and Smartphone Apps” section of this review), Samsung have given the interface a drastic makeover, increasing the homescreen count from one to five.

These homescreens each focus on different aspects of the TV’s capabilities. The first is dedicated to live TV, offering a picture-in-picture view of the channel you’re currently watching, as well as recommendations based on your viewing habits showing similar shows as thumbnails surrounding it. Access to the Guide, Timeline and Recorded TV (shows are stored on a connected USB device) sit on the bottom.

The second screen focuses on On Demand TV and movie streaming services, and again offers recommendations based on your viewing habits, improving over time. As it stands, it can be confusing figuring out which service the recommendation comes from (it’s a pain to have the premium Acetrax service pop-up when we’re only looking for Netflix content), and though a cool feature, it’d benefit from being able to limit the sources the Samsung guide trawls through.

A third screen offers social feeds, aggregating Twitter and Facebook accounts into one place, and giving priority to video content shared on each site that can be played back on the TV. Also present here (once you’ve accepted the option to install it) is a Skype app, though it’s severely limited without a built-in webcam.

A fourth screen allows access to music, video and photos shared on your network or a locally connected device, displayed in all their glory on the big screen. Recorded TV shows can again be accessed from here too.

A final fifth screen offers a grid-like interface for accessing dedicated apps, covering everything from health and fitness videos to Spotify, a web browser (which is among the best we’ve tried on a TV), and a great selection of video services on offer including Netflix, LoveFilm, BBC iPlayer and iTV Player, as well as Samsung’s own 3D channels. A surprisingly robust app store lets you add more apps to this hub, including TV-optimised versions of popular mobile apps like Angry Birds

It’s an intuitive layout that can be controlled in a variety of ways, but the whole experience suffers from the use of a slower dual-core processor. While the F8000 has a quad-core processor, the F6400’s dual-core means navigating the Smart TV menus (well, all menus on the screen in fact) seem a little sluggish by comparison. Without having tested the two TVs in such close proximity we perhaps wouldn’t have noticed it at all, making it a minor grumble, but it’s a point where the pricer set’s premium value becomes clear. 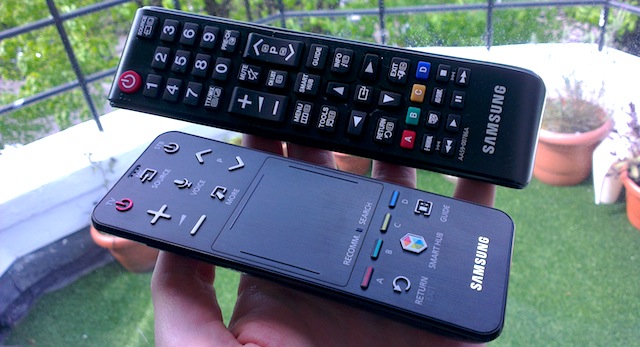 As seems Samsung’s standard this year, the UE32F6400 comes with not one, but two remote controls.

One is a standard remote with rubber buttons, including shortcut keys for accessing Smart TV features, as well as playback controls for videos and ARC-connected HDMI devices. It’s comfortable and sensibly laid out, and Samsung have sensibly removed the rarely-used “Family Story” shortcut button. It’s a shame that there’s no dedicated button for accessing aspect ratio, leading to a lengthy trawl through menus to get to it, and the same goes for the Game Mode. Also missing is the backlight, which featured in last year’s flagship set’s remote, though arguably it’s battery draining excess anyway.

The second remote control is smaller and more squat, and is identical to that which comes with the F8000 except that it has a black finish compared to brushed silver finish of the more expensive TV’s remote. It features far less physical buttons in favour of a touch panel. It works surprisingly well, particularly when using it like a laptop trackpad for browsing the TV’s web connected features. It also features a built-in microphone, meaning you can use the TV’s voice-activated controls without shouting across the room, or over the volume of the set itself. However, it’s not as instantly familiar an experience to use as the standard remote, and, just like last year, we still found ourselves using the regular remote more often than the touch-enabled one.

While Samsung’s motion control system isn’t present here, Android and iOS apps can hook up the screen for some second screen functionality. With them you can stream video from the TV tuner to a tablet or smartphone, control the TV from an app or share content from the phone to the TV. Unfortunately, there’s no single all-encompassing app yet that covers all features, meaning you’ve got to use a handful in order to get to all the features. iOS apps are still missing a few features, but Samsung promise to add more features as time goes on. All in, the tablet/smartphone controls are more useful than the gesture and voice counterparts at this stage.

Samsung’s 3D TV range scales nicely this year, with this inexpensive 3D Smart TV retaining many of the very cool features of its more expensive stablemates. 2D performance is excellent, and 3D performance fair. But the real star of the show here is the Smart TV platform, of an incredibly high quality and one that would have come with a massive premium just a few short years ago. If you’re looking for a web-connected set that won’t break the bank and let you dip into 3D thrills from time to time, this is a great value set to invest in.