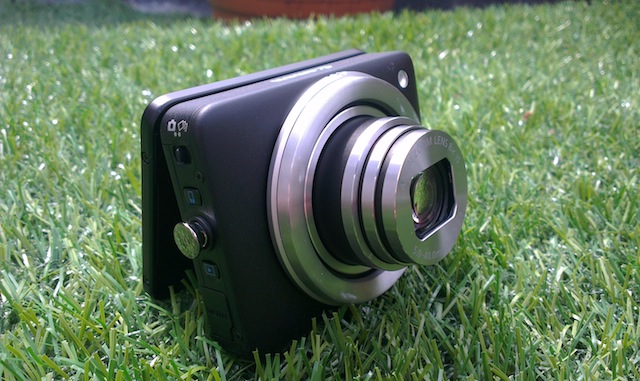 Price as reviewed: Around £270

Packing Canon’s Digic 5 image processing engine and a 12.1MP CMOS sensor into a tiny, quirky compact frame, Canon’s PowerShot N will certainly turn heads. But can it take a good photo, and it is it comfortable to use? Read our full review to find out!

Canon’s PowerShot N could arguably called a “wearable” camera thanks to its tiny 78.6 x 60.2 x 29.3 mm size and 195g weight. Though it’s chunkier than your average smartphone, it’s certainly pocketable, with its squared off design meaning that the lens system makes up practically all of the front side of the snapper. With two bolts either side of the palm-sized camera for tying on a carry strap, it’s a great option for lifeloggers looking to upgrade from a smartphone and Instagram.

Spin the camera around and you’ll find a 2.8-inch touchscreen that can be folded 90-degrees, giving you access to image settings, filters and playback of still shots and videos, as well as touch-focus. While the camera can stand tent-like with the touchscreen, it’s a shame it can’t be folded over 180-degrees to face the subject for framing up self-portraits – quite a missed opportunity, given the target audience.

Around the edges are a handful of switches and physical buttons, including a power button, a playback button, one to switch on the camera’s built-in Wi-Fi connectivity for connecting to a tablet or smartphone, and another to access the Creative Shot mode (which we’ll detail a little later). There are also a handful of ports and slots; one for accessing the microSD storage, another for hooking up the charger, and another to access the AA-size rechargeable battery. Inevitably, a camera this small was always going to suffer with fiddly buttons and ports, and it can be a bit difficult to press the button you need in a hurry as a result.

A camera this small packing in Canon’s impressive Digic 5 image processing engine, a 12.1MP CMOS sensor and an 8x optical zoom (28-224mm equivalent on a conventional 35mm camera) would usually be the headline features, but it’s actually the control scheme thats most interesting with the PowerShot N.

Rather than using dedicated shutter buttons or zoom dials, zoom and shutter controls are housed in the lens ring. Split into two sections, the thicker first section twists to control zoom distance, while the thinner grooved section is pressed down on to take a photo. It’s a novel way of making the most of the limited space on offer, and it works surprisingly well given how easily you’d imagine it to be for your fingers to slide into frame when using it. Pushing down on the lens ring can sometimes shift your framing if you don’t have a steady hand however, and there will definitely be those out there who prefer the ergonomics of a regular shutter button. Lens-shifting image stabilisation helps here a fair bit though. The zoom speed is very fast too, and you can easily find yourself veering into the crummy old digital zoom levels if you’re not very careful.

The PowerShot N’s BSI 12.1 MP sensor shoots JPG images at 4000 x 3000 resolution, with widest apertures of  f/3.0 and f/5.9 and a maximum sensitivity of ISO 6400 . However, grain began to muddy our images at ISO 400, so don’t go too crazy there. Even at the highest ISO 6400 setting images remain legible though, providing you’re willing to accept a drop-off in vibrancy in darker image areas and a drop in definition around the edges of lighter elements.

For the most part however the PowerShot N performed admirably. Colour reproduction is very accurate (even if reds lost a little vibrancy in some of the softer shades), with no fringing on dramatic contrasts. Macro modes also impressed – we pushed the camera right into the face of a number of flowers and Lego figurines, and the camera quickly and accurately picked up the desired focus points with an attractively shallow depth of field.

Those expecting a full raft of manual controls will have to look elsewhere though – you’ve no manual control over shutter speed (ranging from 1/2000 second) nor aperture for example, leaving you with only the auto mode, program, hybrid auto six built-n scene options.

You can check out some of our sample shots and the settings they were captured under in the section of this review titled “Sample Shots”. 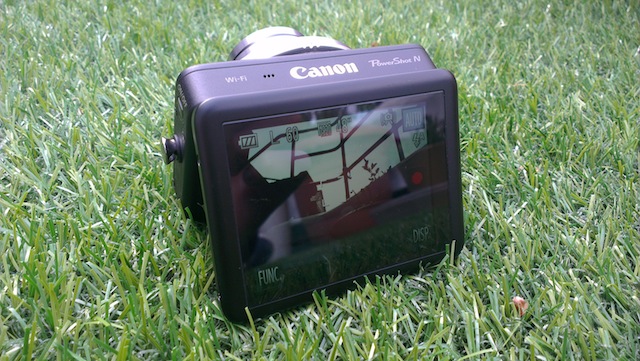 Video capture is strikingly detailed, looking super sharp in brightly lit scenes and managing to adjust to quick changes in ambient lighting rapidly without jarring transitions in the resulting footage. Ambient sounds is clearly picked up too, though the zoom lens can bring some unwanted noises into your clips, so use with caution. 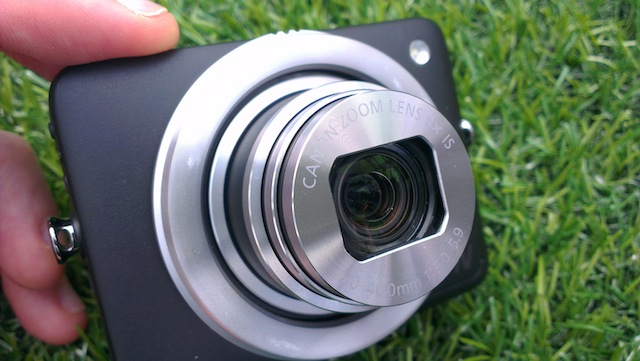 As well as a standard selection of Instagram-like filters, the PowerShot N also has a feature called Creative Shot mode, which automatically applies a number of filter effects to a shot, giving you five alternative versions of your captured photo, as well as saving the original. It’s a neat gimmick, and can make for speedy experimentations, but suffers from a lack of direct control over the filter parameters.

Wi-Fi connectivity is limited too, allowing you to share photos between the camera and an iPhone or Android device through Canon’s CameraWindow app, as well as add a GPS tag.

You’ll get 200 shots out of the PowerShot N’s camera, or 280 if you use it’s Eco mode that dials back things like the brightness of the touchscreen. Expect less with Wi-Fi switched on. We’d have liked to have seen the camera hit around 300 in Eco mode and 250 standard, but that’s a bit of a tall order we imagine in a camera this size with such limited space for a large capacity battery.

All images are at the camera’s maximum 4000 x 3000 resolution, and have not been tweaked with any image editing programs. Click on each to see them blown up to full size. Settings used are displayed below each image.

Canon’s PowerShot N is ultimately a strange little snapper then, and one that’s in turn incredibly niche. As a proof of concept, it’s superb – it’s a tiny little thing with a unique control system, a camera with strong image quality that seems at odds (in a positive sense) with its gimmicky design. However, those quirky controls are as likely to turn people off as they are to intrigue them, while the high price is just as likely to scare would-be buyers away. It’s an attractive prospect, but the Canon PowerShot N won’t be for everyone.