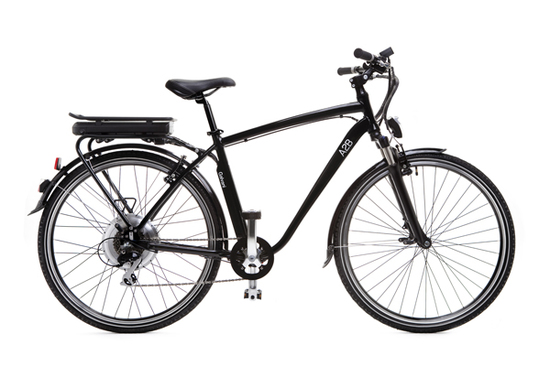 Unless you are a big aficionado of electric bikes, A2B is probably not a brand you’ve ever heard of. But they actually launched one of the first electric bikes, or e-bikes, nearly four years ago.

Dubbed the A2B Metro it was quite well received at the time but at £2500 was quite pricey as well as fairly bulky, tipping the scales at a hefty 37Kg. Since then the company has gone through a number of changes, including new ownership (it is now owned by Indian scooter firm, Hero-Electric) as well as a complete re-branding.

Still available, the A2B Metro has been renamed the Octave while new models include the retro looking Galvani which I tested out at a launch at London’s National Theatre. Also just launched are several new premium e-bikes manufactured in Germany, rather than the Far East where most are currently made.

There’s even a foldable electric bike, the Kuo, which at 19Kg is the lightest in the range. The aim for 2015 is to get the whole range down below 20Kg, making them much nearer the weight of a conventional pedal bike.

Get on your e-bike

In 2013 it is expected that around 2 million e-bikes will be sold globally with Germany and Japan the largest markets by quite some margin with around 1 million units between them. Though the UK still lags some way behind with e-bike sales of less than 50,000 per year it’s expected that initiatives such as e-bike rental for major cities like London will help boost numbers as well as raise awareness.

Approximately 40 per cent of e-bikes are used for commuting purposes and they are particularly popular with older users (55 per cent of users are over 50) who are keen to cycle to keep fit but don’t fancy the challenge of cycling up steep hills!

Whereas early incarnations of e-bikes were little more than conventional pedal bikes with huge batteries strapped on them, later models have – thankfully – focused more on design. Expected to retail for £1400 the Galvani looks like a conventional, if somewhat retro-styled hybrid bike at first glance but differs in one key respect – underneath the rear pannier sits a 36V Lithium Ion Battery.

Two versions are available (male and female) though the male retro-looking version is by far the more attractive of the two. I tested out the black model but it is also available in white and silver versions.

Weighing in at around 23Kg, the Galvani is a little heavier than a conventional pedal bike, but there is a  Shimano Alivio 8 speed gear box if you want to change gears manually and use it in non-powered mode to give your legs and lungs a work out. As I was cycling on a flat surface I kept it in fourth gear, and switched on the power assist using the backlit display in the centre of the handlebars.

Three Power Assist modes are provided and they take a little getting used to. However, basically the harder you pedal the more assistance will be provided. The end result is that you can find yourself going quite fast without having to put that much effort in, especially driving along a flat surface.

Maximum speed is limited to 25Km/h (15.5 miles per hour) to comply with legal requirements. Any faster and the bike would be classified as a scooter and you would require a licence. Either you can charge the battery via the mains in situ on the bike or you can remove it and charge it in your house if you prefer. Charging takes around 4 to 6 hours and gives a range of up to 90Km depending on how much you use the Power Assist modes.

So would I buy an electric bike? Probably not but that’s because I don’t like the idea of cycling in rush hour traffic around London, even with a motor. However, if I wanted to commute  by bike and lived somewhere quite hilly then I certainly would consider it. At £1450 it’s not exactly cheap, but it would be a good investment especially when you consider how much public transport prices have gone up.

And you can see me riding the bike here: