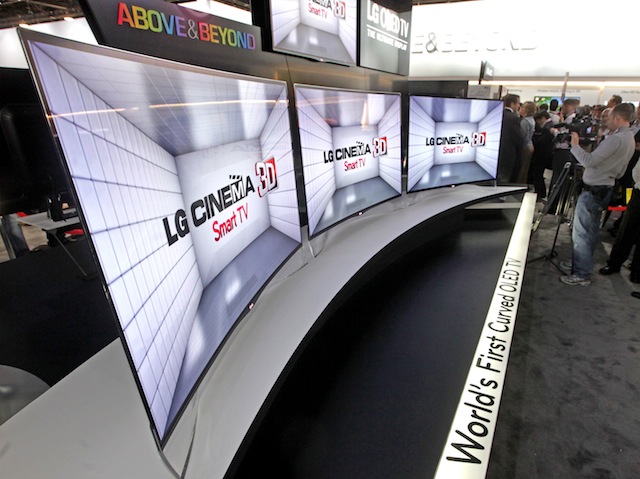 As promised, LG have opened pre-orders on their nifty-looking curved OLED TVs, just two weeks after hinting that they’d get a release at some point this year.

Hitting living rooms within the next month as pre-orders are fulfilled, the 55-inch display was first revealed back at CES 2013, designed to fix “the problem of screen-edge visual distortion and detail loss” as “the entire screen surface is equidistant from the viewer’s eyes”. That’s presuming your sat in the middle of the screen however – we can’t see standard viewing angles applying to this design.

“LG is the first to launch the 55-inch OLED TV,” Havis Kwon, President and CEO of LG’s Home Entertainment Company, said of the screens back in January.

“We believe our new OLED TVs offer the ultimate viewing experience, surpassing anything seen before. The new curved model complements our core OLED TV family with a unique design that capitalizes on the thinness of the screen and the aesthetic beauty of OLED TV.”

The screens are up for pre-order at 15 million KRW in LG’s Korean home turf. That sits at around the £8700 mark. LG has stated that other markets beyond Korea will get the screen in the coming months.