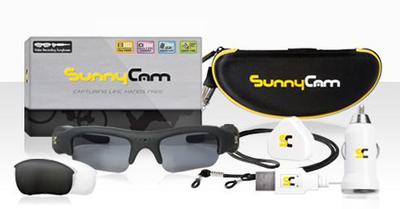 With smart glasses like Google Glass and wearable fitness devices set to hit 70 million sales by 2017 according to a report from Juniper, one company that is hoping to get in on the action is Sunnycam.

At this year’s Gadget Show at the NEC, it demonstrated a pair of HD video recording glasses that are pretty well suited for a number of applications, from recording a football match (handy for referees) to filming customers on the door of a nightclub (useful for security guards).

And while the glasses might like the sophistication of Google’s much talked about Glass technology (Project Glass), which will apparently feature internet browsing, augmented reality and GPS if it’s just recording you are after then these £99 glasses seem a pretty good – and much more affordable – bet.

A 720p camera is fitted in the centre of the glasses so you record exactly what you see and storage is on a 16GB Micro SD card which is supplied as standard. The glasses will hold up to 32GB for between 2 to 3 hours of recording time. Recording controls are built into the frame and the device comes with a number of accessories including clear and black lenses, USB car charger and AC adaptor.

The Sunnycam glasses also record audio – again handy if you are a doorman or referee and you want to record the abuse you are bound to receive. For more information go to SunnyCam glasses. You can also check out the video we shot at the Gadget Show below with the developer of the glasses.

Smart glasses like Google Glass and wearable fitness devices to hit 70 million sales by 2017, devices from Apple and Microsoft on the way, suggests new report