Gaming’s unluckiest engineer straps on his space suit once more as Isaac Clarke again heads off to face the necromorph onslaught in Dead Space 3. It’s got atmosphere by the bucket load, but can Dead Space 3 overcome a series of missteps to still deliver the goods? Read our full review to find out!

Poor old Isaac Clarke. He’s faced off against zombie-spider-alien necromorphs since 2008, saved his beau Ellie Langford numerous times and, since the closing credits of Dead Space 2, has finally settled down in a space-age city to live a normal life with her. Or at least as normal as possible for a man who has made a living out of crushing alien brains with a gravity-charged iron boot. But come the beginning of Dead Space 3 Ellie has left hard-luck-Isaac and become embroiled in a love triangle, gone missing on a mission to halt both the necromorph spawning Markers and the Marker-worshipping Unitologist terrorist forces, and left Isaac seemingly little choice but to be pulled back into action by military top brass Captain Robert Norton and Sergeant John Carver as the only person to ever face the gruesome ganglies and come back more or less intact. Doesn’t this guy ever get a break?

As with the rest of the franchise Dead Space 3 oozes atmosphere. Though fears that the series would side-step its horror past in favour of action set pieces were raised ahead of the game’s release, you can rest assured that Dead Space 3 still has its fair share of scares and a lingering feeling of dread. You won’t feel it quite so much in the first quarter of the game, where the tone is admittedly more action than horror orientated, but the vast majority of the game still brings on a tension-fuelled cold sweat whilst playing. 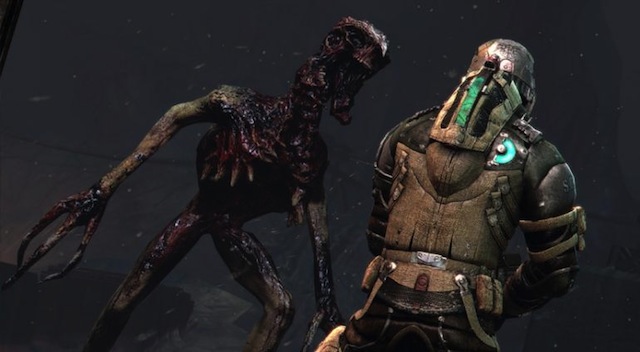 It’s in part down to the incredible world that’s been built in Dead Space 3. Visually, it’s one of the best games you’re likely to see this late on in a console’s life cycle, with detailed character models, impressive dynamic lighting effects and some truly twisted location and enemy designs. The consoles must be firing on all cylinders to get Dead Space 3 running as smoothly as it does. But visuals are only half of what makes the game’s atmosphere so oppressive, and Dead Space 3 is home to some of the creepiest sound design we’ve heard since, well, probably the first Dead Space. From the screech of a marauding necromorph to the clatter of industrial machinery, the chill wind of the games ice-planet setting to the eerie silence of space, you’re totally transported to Isaac’s hostile universe.

Gameplay in Dead Space 3 continues in the same vein as its predecessors, but with a few marked differences. You’ll still trek around ominous locales from a third person perspective, solving the odd puzzle and blasting at alien foes with sci-fi weaponry, knocking off their limbs before going in for the kill, as well as navigating a few unique set pieces (which we’ll get on to later). There’s a new dynamic cover system that doesn’t quite manage to make Isaac any less of a walking tank, but the core visceral, limb-severing shooting action and motion-stopping stasis attacks are as satisfying as ever. However, the main new gameplay addition for the third game in the series is that of in-depth item crafting. 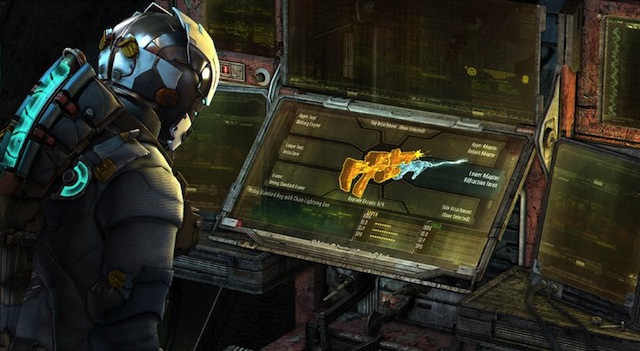 As you explore the frozen planet of Tau Volantis you’ll constantly come across all manner of weapon components that can be used to significantly modify your arsenal of shooters. There are dozens upon dozens of potential combinations to craft, and they’re not purely cosmetic changes. From alternate fire rates to capacity for different ammunition types and even the combination of two guns into one uber-shooter, the multitude of weapon tweaks on offer adds a fresh strategic element to the series’ already-meaty combat. It also encourages you to take on the many side missions on offer throughout the game in the hope of uncovering more powerful components, adding an addictive and worthy collectible mechanic to the series not unlike action RPGs Diablo or Torchlight.

There is a dark corner to this crafting system however. Should you be struggling to uncover the resources you need, you can spend real world money to get them in game. Conservation of ammo and resources is still a necessity of course, but your chances of survival are increased ten-fold if you drop a few real quid in-game. We didn’t, and the game is perfectly manageable without microtransactions being indulged, making it a wholly optional choice. But it is there, it is tempting, and it’s the shape of gaming to come, if not already here.

In another departure for the series, the game can be played in two differing ways; either in a solo lone-wolf mode as with previous entries in the Dead Space franchise, or with a co-op partner in tow playing as Sergeant John Carver. It’s tonally a very different experience, but no less enjoyable. While the solo mode gets its kicks out of keeping you isolated and tense, the co-op mode ramps up the gunplay and enemy count and also lessens potential shocks not only by having a headset partner to chat with online, but also through the increased dialogue interactions between Carver and Clarke. It’s a fully implemented co-op system with a handful of unique side missions and plenty of unique dialogue to enjoy, which helps shed light on the somewhat dense story. 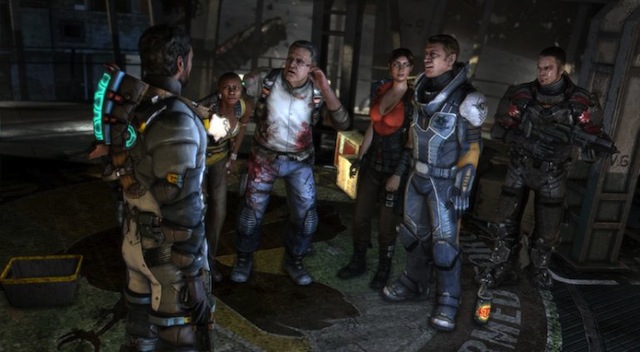 Which leads us on to our next point. Dead Space 3 is a blast to play, but it doesn’t get everything right, and one of its biggest failings is in its story telling. To be totally honest, we’re still not entirely sure what the hell happened, having completed the game. The Dead Space series has always had a quite cryptic plot, but the problems here go beyond confusion and enter the realms of disbelief. Surely nothing would ever convince Isaac to face the necromorphs again, love interest or none? And how can he and his co explorers solve in minutes alien mysteries that have sat unsolved for hundreds of years? As for Isaac, the series’ lead, he’s a lot less interesting this time around. His schizophrenic outbursts are lessened, his motivations unclear, his relationships forced and his demeanour subdued. You’ll root for him in the way you’d support anyone faced with horrific hardship, but he’s not exactly a charmer.

The game also shoe-horns in a number of unique set pieces, with varying degrees of success. They range from a sublime space flight mission through a debris field (it’s one of the game’s many stunning moments) to the infuriating, as when faced with ice-wall climbing instant-death. It’s admirable that the developers want to keep the game from becoming repetitive, but when the lacklustre set pieces are too often sandwiched between long stretches of back tracking and boring fetch quests, there are some sequences that could have done with some heavy editing or should have gone back to the drawing board altogether. 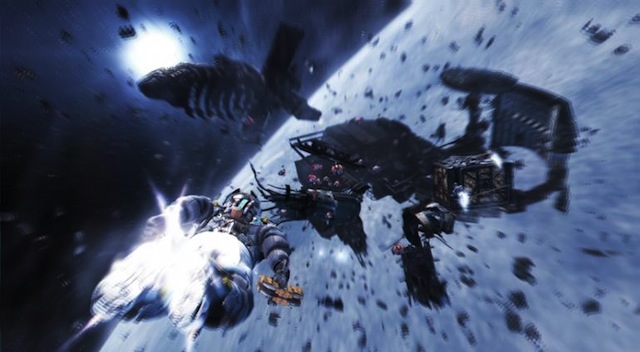 On the Xbox 360 version there’s also optional Kinect support, allowing such functionality as the voice activated sharing of resources in the co-operative mode. It works fine, but as ever all its features are far more easily activated through a simple button press.

Though we were weary of Dead Space 3 going in, we’re glad to say our fears were mostly unfounded. Though it struggles in the story department and its scares have been softened over the years, the core shooting gameplay remains incredibly satisfying, and the world created one of the most evocative in recent gaming memory. It’s not without its flaws (ones that long-time series fans are likely to spot more readily and feel more keenly than newcomers) but Dead Space 3 delivers a jaw-dropping production packed full of fun, tense moments.