We strap on our nanosuits and head out into the urban jungle of Crysis 3. Bow in hand, will this first person shooter make up for the disappointment that Crysis 2 proved to be? Read on to find out!

2007’s original Crysis game drew you in with visuals so stunning for their day that few were able to afford a PC rig suitably powerful to play it on. Once the allure of its sublime looks wore thin, it was able to keep you gripped through the replayable first-person gameplay that its open-world setting and Predator-like Nanosuit powers offered. Whether sneaking through the undergrowth with an invisibility cloak on or rushing in Rambo style all-guns-blazing with the power armour activated, each encounter with the enemy could be approached in numerous ways, all equally exciting.

But, as Crysis transitioned from being a PC-only title to being a multiplatform console game too, something became lost. Concessions were made. Though the console versions of Crysis 2 held their own visually, it was in part thanks to the fact that all versions of the game (PC included) were far more linear in scope than the first game and its spin-off semi-sequel Crysis Warhead. You were still a power-suit wearing badass, but the amount of choice you were given with which to approach Crysis 2’s comparatively claustrophobic environments and challenges was limited. For all the power that the game’s signature Nanosuit offered, you’d lost video gaming’s most powerful weapon of all: freedom.

Crysis 3 rights many of the wrongs made by its predecessor. While it never feels quite as expansive as the first game in the series did upon release, it’s significantly more open than Crysis 2 was. And that’s without compromising on the series’ breathtaking looks, no matter which machine you choose to play it on.

Crysis 3 is set 20 years after the events of Crysis 2. What’s left of the Manhattan that was ravaged by alien forces in Crysis 2 is now covered by a protective biodome, put in place by the menacing Cell network, who alongside the alien Ceph are the main enemies that returning hero Prophet comes up against.

This framing story serves the game excellently in two ways. Firstly, it’s delivered with aplomb. Though it’s a typically outlandish end-of-the-world plot delivered by developers Crytek, Crysis 3 handles its story with more confidence in this outing than with any Crysis game before. At its worst (towards the end of the game) it funnels the game into linear sequences for the sake of plot progression. But the delivery is consistently excellent throughout. Between the characters’ utterly convincing facial animations and some top drawer voice performances, you’ll be impressed with its presentation even if the story’s content leaves something to be desired. 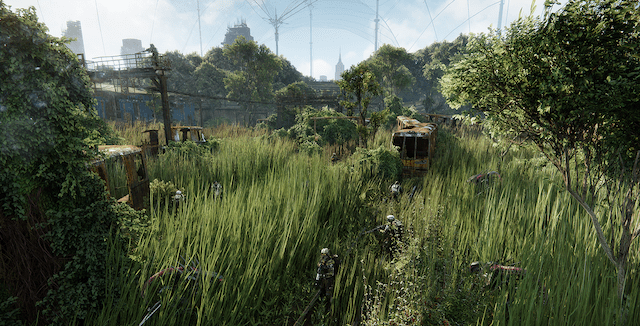 Secondly, the presentation of the biodome itself. Given Crysis 3’s pedigree, it’ll come as no surprise that the game looks absolutely amazing, and the biodome setting is an excellent environment for the art teams to flex their muscles within. New York is now totally overrun with vegetation, bursting through the crumbling remains of skyscrapers and subways. Magnificent lighting and particle effects, along with detailed models and great textures make the game another technical 5-star performance for the Crysis franchise, but its the variety on offer here that really impresses. From swamp-like regions to wide-open plains to the sci-fi weaponry of alien nasties, it’s artistically a superb achievement too.

What’s most surprising is how well the game stands up on the console versions. Of course, a high-end PC, if you’ve access to one, is the ideal way to experience the game, where its maxed-out, hi-res visuals come as close to photo-realism as we’ve yet seen from a game. But even on the ageing Xbox 360 and PS3 consoles, and despite the wide level design, the game looks a real treat, optimised well enough for the hardware to avoid any chugging performance issues that sometimes popped up in Crysis 2.

From a gameplay perspective, the biodome setting is far more well realised than Crysis 2’s locales too. Though the game has its moments of linearity, more often than not Prophet is afforded the opportunity to scope out his prey and plan numerous differing tactical approaches to encounters. 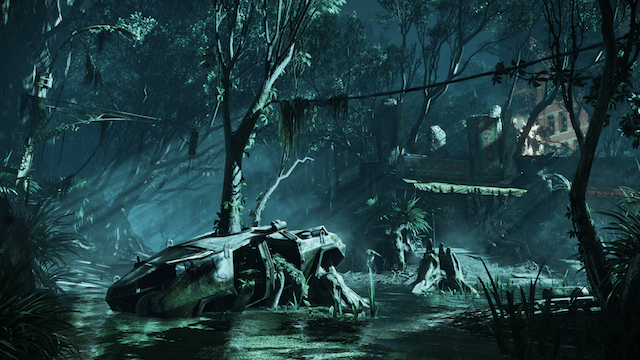 Stealth elements have been given the most care and attention in Crysis 3. As well as the Nanosuit’s limited ability to turn you invisible for short periods of time, Prophet now also has a bow and arrows at his disposal. Using a tactical visor within the open environments you’re able to track down enemies from afar and plan fiendish ways to take them down silently. Then there’s the introduction of the bow weapon, so fun it is to wield that you’ll likely use it for the majority of the game. The bow, capable of satisfying one shot kills tempered by limited ammunition is key to any successful stealth attack. Hearing enemy soldiers panic as they find an ally downed by an arrow is sadistically good fun, but creeping back up on the body to reclaim your spent, rare ammunition is tense. Successfully clearing an area without being detected feels like a real accomplishment, and the design of each level, paired with solid enemy AI, accommodates this approach very well. New skills such as the ability to hack enemy turrets and electronic mine-fields help to further widen the opportunities for creative death-dealing.

If anything, the quality of the straight-forward gunplay has been left in the shadows this time around. Though you’ve still got the option of boosting the Nanosuit’s armour for head-on encounters, it feels simplistic and mindless in comparison to the stealth elements. The Rambo approach can see you dash through the single player game in 5 or 6 hours, and despite a wide array of weaponry and on-the-fly upgrades, it lacks the emergent chaos that made a similar approach in the original Crysis so much fun. Even in its final quarter, as the game encourages a gung-ho approach, it favours Call of Duty style set-pieces rather than madness orchestrated by your own hand. 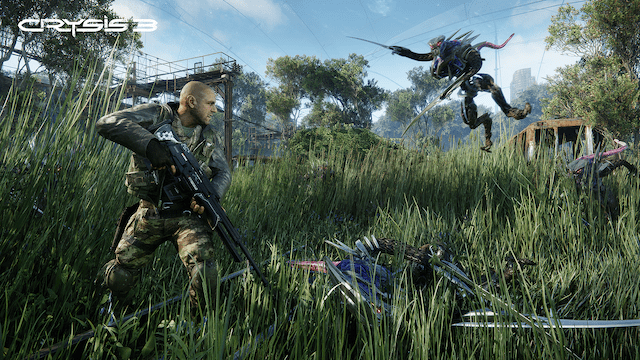 For the most part, Crysis 3’s single player campaign is a return to form then. And while the series’ multiplayer modes have always felt a little tacked on, there’s more thought gone into them this time around. While online standards such as deathmatch, team deathmatch, capture the flag and King of the Hill are all present (albeit with the addition of Nanosuit powers), Crysis 3 introduces the intriguing Hunters mode. Here, two players act as Nanosuit wearing “hunters”, tracking down and picking off a team of regular, player-controlled troopers. As each trooper is inevitably picked off by the more powerful predatory hunters, fallen troopers join the ranks of the Nanosuit team, until one trooper is left standing and victorious. It’s a really tense game mode, and a unique one that could only exist within the gameplay mechanics of a Crysis game.

More focussed than the first Crysis, but more liberatingly open than the second, Crysis 3 sees the series finding a successful balance between the demands of an open world and the desire for increasingly elaborate visuals. Still a graphical powerhouse, the franchise has a little more soul thanks to improved story execution and yet offers increased opportunity for sandbox-style emergent gameplay. Gamers with a penchant for stealth gaming will be those best served, but all looking for a shooter with a bit more brains and a hell of a lot more beauty will find something to enjoy with Crysis 3.