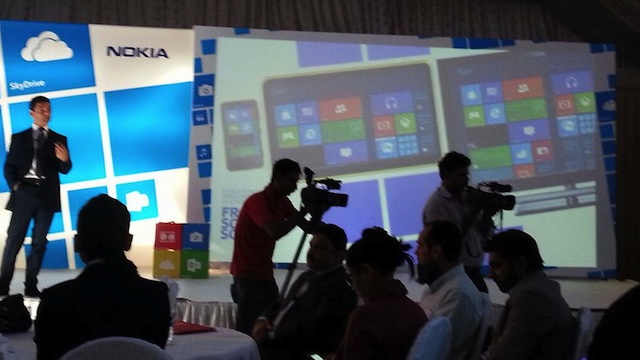 What have we here, eh? It seems that Nokia may have inadvertently revealed their first tablet device to the public during a launch event for the Nokia Lumia 620 handset in Pakistan.

A presentation as part of the event has been sneakily snapped by Sense Applied, where a giant screen shows a Lumia 620 and a Windows 8 monitor sandwiching an as-yet-unrevealed tablet device.

Though the spy shot isn’t the clearest ever (it is, after all, a photograph of either a slide or video playing on a screen a good few feet away) it does reveal a few snippets of information on the device.

Firstly, the tablet looks to be running on the Windows 8 platform, likely Windows 8 RT, keeping the same Live Tile interface that characterises the Lumia range and indeed all current Windows Phone 8 devices.

When sat next to the 3.8-inch Lumia 620 it dwarfs the smartphone, presuming the shot is to scale, suggesting the tablet will be closer to the 10-inch category than the 7-inch one. In terms of design, there seems to be a yellow bezel around the screen (possibly extending around to the back casing of the device, if the current crop of Lumia devices is anything to go by), with rounded rather than straight corners.

Nokia have dabbled in tablet tech in the past, most notably with the failed Meego operating system, which threw up prototypes that never saw a commercial release in the end. Since getting in bed with Microsoft and the Windows 8 ecosystem, it’s seemed odds-on that Nokia would also release a tablet device, and as the snap comes from an official Nokia event, it seems that this is indeed the real deal.