Skyrim gets its best add-on pack since launch with Dragonborn, a sizeable downloadable addition with new locations, quests and abilities to enjoy. Read our full review for our verdict on the newly-released PC edition.

Can we really give more of our lives over to Skyrim addiction? Well over a year since the game first launched, and following two DLC pack releases (one minor, one a bit more substantial), PC gamers finally have a full-blown expansion pack release fitting of the epic RPG that spawned it. For those uninitiated with Skyrim’s world, we urge you to read our full review of the main game first by clicking here. Note that Dragonborn won’t work without the original Skyrim also installed too.

Dragonborn takes place on the island of Solstheim, a location that will be familiar to series veterans who have played the Bloodmoon expansion pack for the Elder Scrolls III: Morrowind. Though sharing some of Skyrim’s snowy peaks, it’s overall a vastly different place tonally than the main game’s world. Far more desolate, it’s rocked by volcanic activity and features some truly bizarre sights. Giant crustacean shell housing and towerblock-tall mushrooms litter the landscape, giving an otherworldly feel not found in Skyrim’s otherwise Norse-tinged sights. 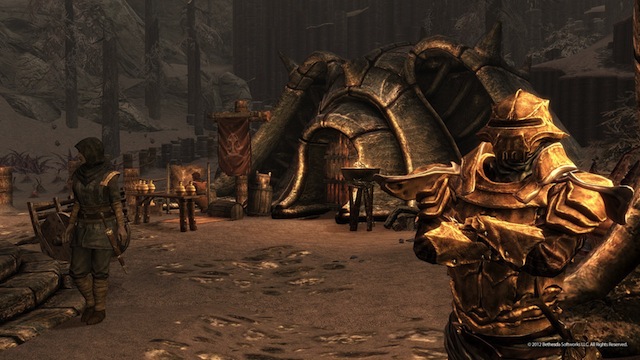 Following an attempt on your life by cultist assassins, you quickly discover that you’re not the only “Dragonborn” in the land able to use the powerful, magical language of flying lizard beasts. The people of Solstheim have become entranced with the allure of high priest Miraak, the very first Dragonborn, who has been banished to the alternate plane of Oblivion and is plotting your downfall and his own cruel return. You’re out to stop him.

It’s a lengthy quest, taking up seven main missions. While the final boss encounter is a wasted opportunity that turns out to be little more than the usual sword-slugging match Skyrim is famed for (albeit against an opponent with an inordinate amount of health), it’s a worthy tale that really comes into its own when you get to visit the realm of Apocrypha. Here, you’re confronted with all manner of Lovecraftian beasts, exploring areas teeming with writhing tentacles and squid-headed guards. It’s totally unlike anything that’s ever gone before in Skyrim and is worth the asking price alone. It’s like all the game’s designers’ maddest ideas have been let loose in this supplementary world, and it’s positively oozing with flashes of creepy imaginative brilliance. 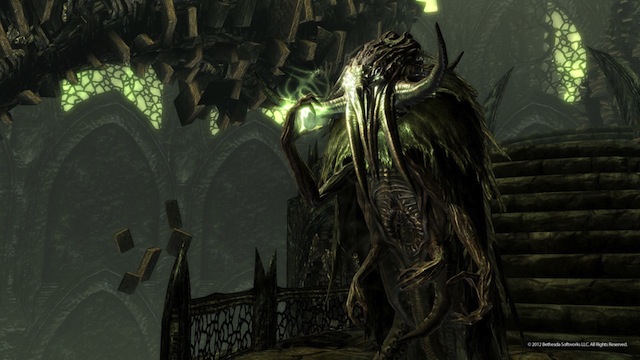 As well as a bunch of new weapons to wield and armour to wear, Dragonborn introduces the opportunity to fly dragons in Skyrim – a feature fans have been calling out for ever since the original game’s release. Sadly, it’s not quite the exhilarating experience we’d hoped for. Dragon flight is a surprisingly “hands-off” activity, with the dragons themselves handling most of the flight controls and the camera often failing to keep up with the action, especially if you veer anywhere close to a solid object or the ground. Though you can control the odd in-flight projectile attack and your beast’s landing spot, just don’t expect this novelty to rival a flight sim in terms of depth.

But, as with most of Skyrim, the real joys to be had with Dragonborn are off the beaten track. Solstheim isn’t as vast as the main Skyrim map, but it’s still a sizeable chunk of land to explore, and it’s full to bursting point with crypts, barrows and dungeons to loot. There’s a distinctly different tone to these locations than those found in the main game, and going for a trek through these arid lands will once again re-ignite your love for the game. 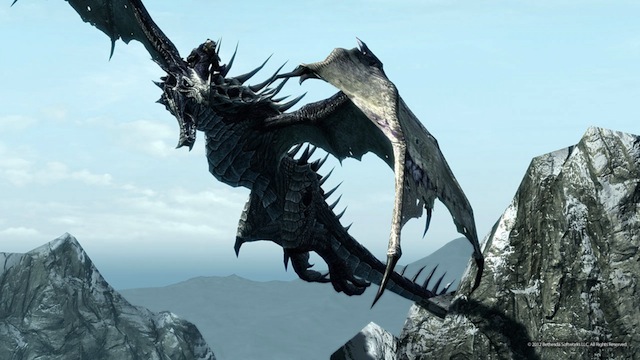 Often, experiences had in the main game tie directly into events uncovered in Dragonborn too, giving this expansion a sense of cohesion sometimes missing from Bethesdas’s post-launch efforts, while the cast of characters to meet here is often more colourful than the stoic inhabitants of Skyrim’s icy tundra. A secondary quest line is also on offer and is nearly as long as the main quest to best Miraak, instead tasking you with uncovering a plot against the Dark Elf family that rules the island.

A “proper” expansion that will add weeks of gaming onto an already gigantic adventure, Dragonborn is a unique and exciting part of the Skyrim universe to explore. It’s a bit on the pricey side, but the depth of content on offer here more than makes it worth its cost. If you’ve yet to indulge in Skyrim add-on packs, this is definitely the one to invest in.